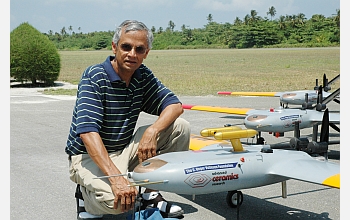 V. Ramanathan, chief scientist of the Maldives Campaign, with AUAVs.

A research consortium funded by the National Science Foundation (NSF) and led by the Scripps Institution of Oceanography at the University of California, San Diego, has successfully sent a fleet of aerial drones through the pollution-filled skies over the Indian Ocean, thereby achieving an important milestone in the tracking of pollutants responsible for dimming Earth's atmosphere.

During the Maldives AUAV Campaign (MAC), groupings of three aircraft were flown in a vertical formation that allowed their onboard instruments to observe conditions below, inside and above clouds simultaneously. Researchers hope the data produced during the flights will reveal in unprecedented detail how pollution particles cause dimming and contribute to the formation of clouds which amplify the dimming caused by the pollution.

"MAC has demonstrated that lightweight AUAVs and their miniaturized instruments are an effective and inexpensive means of simultaneously sampling clouds in polluted environments from within and from all sides," said Jay Fein, program director in NSF's Division of Atmospheric Sciences, which funded MAC. "They will serve as critically important additions to our atmospheric measurement capability for one of the major issues in climate change science: How does pollution affect cloud microphysical and radiative processes in the context of weather and climate?"

Stacked flights with manned aircraft have been attempted, but rarely. The difficulty and cost of assembling and coordinating three similar aircraft have prevented the sort of repeated measurements required to sample clouds adequately. "Based on MAC's success it is possible that in five years, hundreds of lightweight AUAVs will be documenting how human beings are polluting the planet and hopefully provide an early warning system for potential environmental disasters in the future," said Ramanathan.

The skies over the Indian Ocean visibly bear the imprint of human activities in South Asia, frequently in what are termed atmospheric brown clouds, particulate-laden haze and cumulus clouds that frequently blanket the region. The role that dust and aerosols from industrial, urban and agricultural emissions play in creating this brown haze is an important variable to researchers who study climate change, espeically how human activities could be changing the planet's albedo, or reflectivity.

Cloud cover cools Earth's surface by reflecting solar radiation back into space. In recent years, researchers have realized that pollution in the atmosphere, and the dimming and cooling it causes, could be leading scientists to underestimate the true magnitude of global-warming trends observed in recent decades.

Ramanathan has led a consortium of academic and industrial partners in the development of aircraft and integrating them with miniaturized instruments that can obtain aerosol-cloud-solar radiation data in remote regions once considered unobtainable: multi-dimensional portraits of clouds created in polluted environments over periods of several hours.

Flights took place between March 6 and March 31, 2006, taking off from an airport on the island of Hanimaadhoo in the Maldives. Each AUAV tracked a separate component of brown cloud formation. The lowest, flying beneath the cloud, quantified the input of pollution particles and measured quantities of light that penetrated the clouds.

"We're excited about being involved in the study of atmospheric brown clouds using cutting edge flight control software developed in our unmanned aerial vehicles," said Anthony Mulligan, CEO of Advanced Ceramics Research. "We're have provided scientists with a way to further their research, and look forward to providing a low-cost, effective way to gather additional information."