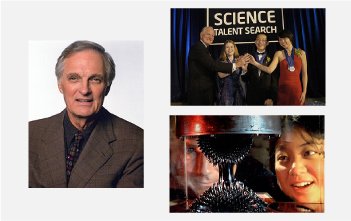 Alda, Intel's Barrett and the ASTC won Public Service Awards from the National Science Board.

Today, the National Science Board (NSB) honored actor Alan Alda and Intel Chairman Craig R. Barrett with 2006 Public Service Awards for their extraordinary individual contributions to communicating science to the public and for increasing science literacy across broad audiences. The board named the Association of Science-Technology Centers (ASTC), a major supporter and representative of science centers and museums worldwide, to receive a Public Service Award that acknowledges the work of organizations.

Alda, Barrett and representatives from ASTC will accept their awards May 9 at a dinner to be held at the Smithsonian's National Museum of Natural History in Washington, D.C.

Alda gave us decades of laughs as the mischievous Hawkeye Pierce on M.A.S.H., introduced political tension as the brusque, altruistic, conservative senator Arnold Vinick on The West Wing, and enraptured us with inspiring performances on stage. An actor, writer, producer, director and immensely versatile communicator, he researches his subjects thoroughly and remains true to them. Alda is a natural for science, some might say.

Away from the cameras and in a corporate board room, Craig R. Barrett, chairman of computer giant Intel Corporation, was bringing his own passion for education and science into his leadership style. In his very first act as the company's chief executive nearly a decade ago, Barrett announced that Intel would become "title" sponsor of the prestigious Science Talent Search, the 65-year-old nationwide competition among high school seniors many call the "junior Nobel." The competition was previously supported by Westinghouse.

Alda pursued what turned into a 6-year quest to produce a play on the life of Nobel Prize-winning physicist Richard Feynman in QED, a story of the complicated genius whose work developing the nuclear bomb and redefining principles of quantum mechanics never deterred him from studying what, to him, was fun. With Feynman's passion for physics and his compelling, simple stories about it, Alda hosts PBS' discovery series, Scientific American Frontiers. As host, Alda displays an excitement about pure discovery and engages his audience as scientists answer questions often as they create new ones.

Barrett, a materials scientist with a doctorate from Stanford University, brought the Intel Science Talent Search to a new generation, initiating large increases in scholarship awards and other prizes to the winners.

Under Barrett's leadership, the company now  invests approximately $100 million per year in programs to improve science and mathematics education in over 50 countries.

Barrett's interest in teachers led him to undertake a new Intel "Teach to the Future"® program that has trained more than 3 million teachers nationwide to effectively integrate technology into their classrooms.

Intel's Computer Clubhouse Network is also a big effort under Barrett. An after-school, community-based, technology learning program, clubhouses help underserved youth acquire the tools necessary to succeed in the 21st century. There are now more than 100 clubhouses in 22 countries.

ASTC and its members have been a major influence on informal science learning since the organization's inception in 1973. It is now the largest organization of interactive science centers in the world. The 425 operating science centers and museums in 44 countries and in every U.S. state serve 96 million people, including more than 24 million students who visit as part of school groups.

One of ASTC's more recent initiatives as part of the International Polar Year (2007-2008) celebration, is a new multi-partner effort to raise public awareness about the impact of global climate change, called IGLO, "International action on GLObal warming."

NSB initiated the Public Service Award in 1996 as a way to annually recognize individuals and organizations for their extraordinary contributions to increase public understanding of science. The first honorees were named in 1998. Today's announcement brings the total number of Public Service Award recipients to 10 individuals and 10 organizations.

The National Science Board is an independent 24-member body of policy advisors to the president and Congress on matters of science and engineering research and education, and is the policy making and oversight body for the National Science Foundation (NSF), an independent federal agency that supports almost all areas of fundamental research and science, technology, engineering and mathematics education nationwide.

More information on the recipients may be found at: