Geologists Drill Into Fossil Magma Chamber Deep Under the Ocean 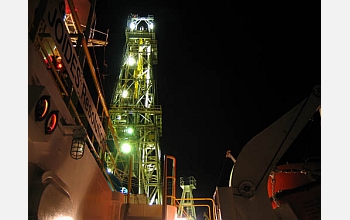 The derrick of the JOIDES Resolution, the scientific drilling ship used to recover the ocean crust.

Scientists aboard the research drilling ship JOIDES Resolution have, for the first time, drilled into a fossil magma chamber under intact ocean crust. There, 1.4 kilometers beneath the sea floor, they have recovered samples of gabbro: a hard, black rock that forms when molten magma is trapped beneath Earth's surface and cools slowly.

The scientists, affiliated with the Integrated Ocean Drilling Program (IODP), published their findings on April 20 in Science Express, the online edition of the journal Science.

Although gabbro has been sampled elsewhere in the oceans where faulting and tectonic movements have brought it closer to the seafloor, this is the first time gabbro has been recovered from intact ocean crust.

The borehole into the magma chamber took nearly five months to drill, and required the use of twenty-five hardened steel and tungsten carbide drill bits. Getting there "is a rare opportunity to calibrate geophysical measurements with direct observations of real rocks," said geophysicist Doug Wilson of the University of California at Santa Barbara, lead author on the Science Express paper. "Finding the right place to drill was probably the key to this success."

Wilson and his IODP colleagues found that place by identifying a region of the Pacific Ocean that formed some 15 million years ago when the East Pacific Rise was spreading at a "superfast" rate of more than 200 millimeters per year, faster than any mid-ocean ridge on Earth today.

"We planned to test the idea that magma chambers should be closest to the Earth's surface in crust formed at the fastest spreading rate," said Wilson.

"These results confirm ideas about the way in which fast-spreading oceanic crust is built," said Jamie Allan, IODP program director at the U.S. National Science Foundation, which co-funds the program. "This new understanding opens the way to understanding the origin of oceanic crust, which we can best do by deep drilling."

"We've accomplished a major goal scientists have pursued for more than 40 years," agreed geologist Damon Teagle of the National Oceanography Centre at the University of Southampton, a co-chief scientist of the drilling expedition. "Our research will ultimately help answer an important question: how is new ocean crust formed?"

The formation of ocean crust is a key process in the cycle of plate tectonics, which constantly repaves the surface of the planet, builds mountains, and leads to earthquakes and volcanoes.

"Sampling a deep fossil magma chamber will allow us to compare its composition to overlying lavas," said expedition co-chief scientist Jeff Alt of the University of Michigan. "It will help explain whether ocean crust, which is about six- to seven- kilometers thick, is formed from one magma chamber or from a series of stacked magma lenses. The size and geometry of these lenses affect the composition and structure of the ocean crust, and circulation of seawater through the crust."

Such circulation leads to the formation of spectacular hydrothermal "black-smoker" vents--oases that support exotic life forms in the deep ocean.

IODP is an international marine research drilling program dedicated to advancing scientific understanding of the Earth, the deep biosphere, climate change, and Earth processes by monitoring and sampling sub-seafloor environments.