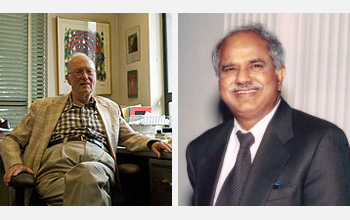 The National Science Board today named Raj Reddy and Charles Townes to receive the Vannevar Bush Award for their lifetime contributions to science and long-standing statesmanship in science on behalf of the nation.

The winners will receive their awards May 9 at a dinner at the Smithsonian's National Museum of Natural History in Washington, D.C.

A still-active Nobel Prize-winning physicist at age 90, Townes is credited as the father of quantum electronics. His invention and demonstration of the maser (microwave amplification by stimulated emission of radiation) and its optical counterpart, the laser, kick-started a new generation of modern communications, global networks and photonic science and technology. Townes' work has led to developments such as the atomic clocks that keep the world's time and the ultra-sensitive radio receivers that were part of the first communications satellites.

Townes shared the 1964 Nobel Prize in Physics with Alexander M. Prokhorov and Nikolai G. Basov for work in quantum electronics leading to the "construction of oscillators and amplifiers based on the laser-maser principle."

Raj Reddy is considered a national leader in transforming computer science from a disparate group of academic disciplines into an integrated field, built upon his seminal work in human-computer interaction, artificial intelligence, speech technologies, robotics and other integrated computing innovations. His work has helped the United States lead in a range of computer science developments.

Townes has spent that past 39 years of his long and distinguished career at the University of California, Berkeley. Besides his scientific achievements, Townes also served many governmental organizations. He was vice president and director of research of The Institute for Defense Analysis and vice chair of the President's Science Advisory Committee, and he organized and chaired the Science and Technology Advisory Committee for Manned Space Flight from 1964 until after the first Apollo landing in 1970. He also chaired NASA's Space Program Advisory Council and was a member of the Defense Science Board in the 1980s.

Reddy, viewed as one of the most notable contributors to the information revolution in the past four decades, founded the nation's first robotics laboratory at Carnegie Mellon University (CMU), which recognized the interrelationships between artificial intelligence and robotics and allowed discoveries leading to some of the nation's most important new technologies. Some of those include broad use of industrial robotics that have increased productivity, state-of-the-art medical developments like hip replacement surgery, and mobile robotic devices in NASA's planetary exploration program. Reddy received the Association for Computing Machinery (ACM) Turing Award in 1994 for major and lasting contributions to the computer field.

In addition to serving on PITAC and organizing the nation's IT research agenda, Reddy's influence nationally and internationally is significant. He taught or mentored a number of Silicon Valley executives. Reddy also established a "CMU West" in the valley.

Much of Reddy's present work at Carnegie Mellon, where he has been since 1969, focuses on making computer science, information technology, and communications relevant to and affordable in developing regions. He spearheaded the Million Book Digital Library Project, and he is active in developing and promoting solutions to help low-level readers in rural environments worldwide gain access to computer technology to improve their quality of life. Some of this is through his project to develop an inexpensive, easy to use  5-in-1 computing appliance, which combines a personal computer, telephone, television, digital VCR, and video-phone, and some is through designing and enabling ubiquitous fiber and wireless networks in the developing world.

The Science Board is a 24-member body of policy advisors to the President and Congress on matters of science and engineering research, and is the policy making and oversight body for the National Science Foundation (NSF), an independent federal agency supporting all areas of fundamental research, primarily at the nation's universities.

The board established the Vannevar Bush Award in 1980 to honor his unique contributions to public service.  Bush was a prominent science adviser to the President and wrote the highly acclaimed report, Science: The Endless Frontier, that steered government science policy beyond World War II into a more modern era and made the case for establishing what became the National Science Foundation.

The awards announced today are the 25th and 26th in the history of the national honor.

More information on the Vannevar Bush Award is at:  http://www.nsf.gov/nsb/awards/bush/bush.htm

More information on the recipients may be found at: http://www.berkeley.edu/news/media/releases/2005/06/17_townes.shtml (Townes)
http://www.rr.cs.cmu.edu (Reddy)