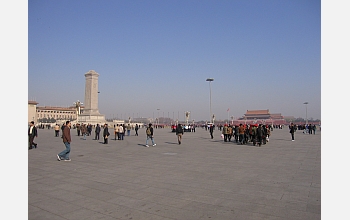 In a study published in the May 15, 2006, issue of the Journal of Climate, published by the American Meteorological Society (AMS), scientists Chul Eddy Chung and V. Ramanathan of the Scripps Institution of Oceanography describe their analysis of sea-surface temperatures and other data from the Indian Ocean region.

They found that cooler-than-normal temperatures in the northern part of the ocean have weakened the natural climate circulation and monsoon conditions in the region, resulting in reduced rainfall over India and increased rainfall over the Sahel area south of the Sahara in Africa.

As the tropical Indian Ocean heats up due to climate change, the authors say, the northern Indian Ocean, which is adjacent to highly populated regions, is not warming as quickly as the rest of the ocean, resulting in increased drought conditions that could have repercussions for more than 2 billion people in South Asia. These conditions impact a range of industries and resources, from agriculture to freshwater availability.

The culprit behind the changes, the authors argue, is an ongoing and intricate clash between air pollution, greenhouse gases and naturally produced climate changes.

In previous studies, they explain, they and an international group of colleagues had found that pollution particles called aerosols are "masking" warming effects from greenhouse gases.

Likewise in the current study, says Ramanathan, director of the Center for Clouds, Chemistry and Climate at Scripps. "It appears that this whole tropical area is being pulled in different directions. The greenhouse gases are pushing in one direction, warming the ocean and trying to make more rain, and the aerosols are pushing in another direction, toward a cooler ocean and less rain. The net effect is to drive the monsoon rain system away from South Asia into the equatorial and southern oceans."

"Some years the aerosols might win, and some years the greenhouse effect may win," Ramanathan says. "We're concerned that in coming decades the variability between the two will become large and it will be difficult to cope with rapid changes from year to year."

"This study is a demonstration that Earth's climate hangs in delicate balance between natural and man-made forces," says Jay Fein, director of the National Science Foundation (NSF)'s climate dynamics program, which, along with NASA, funded the research. "Understanding the processes that can throw climate out of balance is among the most challenging issues facing us today."

In addition to Asia, similar pollution, or brown haze, clouds, can be seen in various regions around the world, including over major urban locations such as Los Angeles and Denver in the United States.

Some five to 10 years ago scientists thought about pollution as solely an urban problem, said Ramanathan. "Now we have discovered that these pollution clouds travel quickly and can cover an entire ocean."