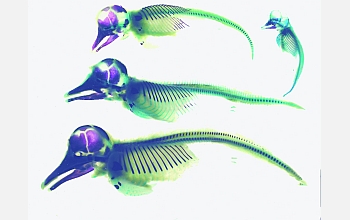 Small blue bars beneath the tails indicate a pelvis that once supported hind legs.

Researchers from the Northeastern Ohio Universities College of Medicine have revealed the genetic basis behind one of the best-documented examples of evolutionary change in the fossil record: how whales lost their hind limbs.

Writing in this week's Proceedings of the National Academy of Sciences (PNAS), Hans Thewissen and his colleagues report that ancient whales--four-footed land animals not unlike large modern dogs--evolved into graceful, streamlined swimmers through a series of small genetic changes during the whales' embryonic development.

"Their research has implications for how evolution acts to create dramatic changes in an organism's body," said Richard Lane, program director in the National Science Foundation (NSF)'s Division of Earth Sciences, which funded the research.

"The findings emphasize the synergistic role traditional paleontology and evolutionary and developmental biology play at the frontiers of the evolutionary sciences," said Lane.

Thewissen and his colleagues began by exploring the embryonic development of whales' cousins, the dolphins. These creatures are intriguing because for a brief time during development they do sprout hind limbs, which quickly vanish again as the embryos reach the second month in a gestation period that lasts about 12 months.

Why? In most mammals, explains Thewissen, "a series of genes is at work at different times, delicately interacting to form a limb with muscles, bones, and skin. The genes are similar to the runners in a complex relay race, where a new runner cannot start without receiving a sign from a previous runner."

In dolphins, however, at least one of the genes drops out early in the race, disrupting the genes that were about to follow it. That causes the entire relay to collapse, ultimately leading to the regression of the animals' hind limbs. By analyzing dolphin embryos, Thewissen showed that the dropout is a gene called "Sonic Hedgehog," which is important at several stages of limb formation.

"That's why dolphins lose their 'legs,'" he says.

In whales, however, the story is more complex. Between 41 million and 50 million years ago, whales' hind limbs did shrink greatly as the former land animals began a return to the sea. But their legs showed no change in the basic arrangement and number of bones, which proved that Sonic Hedgehog was still functioning. Its loss must have come later.

In short, "the dramatic loss of Sonic Hedgehog expression was not the genetic change that drove hind limb loss in whales," Lane said.

Instead, Thewissen and his colleagues conclude, whales' hind limbs regressed over millions of years via "Darwinian microevolution": a step-by-step process occurring through small changes in a number of genes relatively late in development.