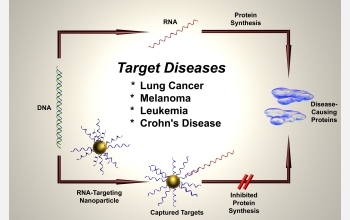 A gold nanoparticle coated with antisense DNA can disrupt protein production quite effectively.

By attaching strands of "antisense" DNA to nanometer-scale particles made of gold, scientists at Northwestern University have significantly enhanced the strands' ability to suppress the production of dangerous proteins--such as those that cause cancer.

The Northwestern team, led by Chad A. Mirkin, director of the university's Center for Cancer Nanotechnology Excellence, was supported in part by the National Science Foundation. The center itself is funded by the national Cancer Institute. The team's findings are detailed in the May 19 issue of the journal Science.

Antisense DNA, a kind of molecular mirror image of ordinary DNA, can be tailored to disrupt the production of specific protein molecules in the cell. For this reason, researchers have long believed that antisense DNA could be more effective than conventional drugs at fighting cancer and other diseases with a genetic basis. But development has been hampered by the tendency of antisense DNA to break down in the body.

Now, however, the Northwestern group has shown that attaching antisense DNA strands to the surface of gold nanoparticles not only makes the strands more stable, but more effective in its protein-suppression role.