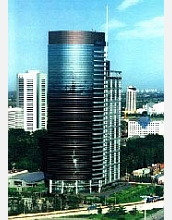 NSF's new Beijing office is located in the Silver Tower in the Chaoyang district.

May 24. 2006, Beijing, China--Representatives of the U.S. National Science Foundation (NSF), the U.S. Department of State, the Chinese government and Chinese scientific societies today celebrated the opening of NSF's research operations office in Beijing.

"China and the United States have a long history of cooperation in scientific research," said NSF Director Arden L. Bement, Jr. "Over the years, the National Science Foundation has worked with many organizations in China to bring together world-class scientists and engineers from our two nations. These collaborations have not only advanced the frontiers of discovery, they have also established relationships of mutual respect and friendship."

"Perhaps the most enduring benefit of international collaboration in science and engineering is its power to bring people together to pursue common goals and build a world of peace and prosperity," Bement said.

The National Science Foundation is a U.S. government agency that supports fundamental research and education across all fields of science and engineering, with an annual budget of $5.58 billion. NSF funds reach all 50 states and several countries through grants to nearly 1,700 U.S. universities and institutions. Each year, NSF receives about 40,000 competitive requests for funding, and makes nearly 10,000 new funding awards. The NSF also awards over $400 million in professional and service contracts yearly.

The ceremony was held at the NSF Beijing Office, which occupies a suite in the Silver Tower high rise located in Beijing's Chaoyang district. The office is part of the U.S. Embassy in China and officially began operations in September 2005.

"With China's increasing importance as a world science and technology player, it is vital for the United States to sustain interactions with international counterparts and specifically with China's rapidly growing science sector," said Ambassador Randt. "The NSF Beijing Office gives the United States a better opportunity to work jointly to seek science-driven solutions to common problems for the benefit of the globe."

According to the NSF report, Science and Engineering Indicators 2006, China ranked fourth in the world in the year 2000 in research and development, with $48.9 billion in expenditures. Two years later, the country ranked third, behind the United States and Japan, spending an estimated $72.0 billion on R&D.

"It is important for the U.S. scientific community, especially young researchers, to be aware of and consider collaborating with colleagues in China in this environment," said Beijing office Director William Chang.

The May 24th opening ceremony will be followed by a U.S.-China science and technology conference that will include 150 distinguished scientists and government officials.