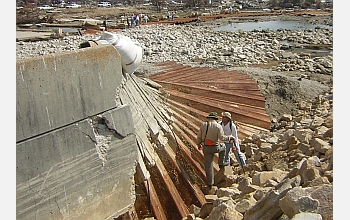 Geotechnical engineers inspect a portion of the floodwall along the Industrial Canal.

Following an eight-month study of the New Orleans levee system and its performance during Hurricane Katrina, a 30-person team of researchers led by Raymond Seed and Robert Bea of the University of California, Berkeley, released a near-complete draft of their findings today in a "town hall" meeting in that Gulf Coast city.

The levee study is one of more than 100 NSF supported in response to Hurricanes Katrina and Rita. For decades, the agency has supported field investigations following all manner of disasters, allowing researchers to travel the world to collect perishable data as soon as possible after an event.

The results of these studies have provided emergency planners, responders and others with key findings ranging from how disasters inflict physical damage to the impact of social factors on evacuation and long-term emotional effects.

This project was supported, in part, by the National Science Foundation under Grants No. CMS-0413327 and CMS-0611632. Any opinions, findings, and conclusions or recommendations expressed in this report are those of the author(s) and do not necessarily reflect the views of the Foundation.

Information about the report release is available from Robert Sanders, Manager of Science Communications at Berkeley: rsanders@berkeley.edu; (510) 643-6998

The NSF award abstracts for the Berkeley-led levee research efforts are below:

A listing of the NSF award abstracts related to the Katrina disaster are available on the NSF-supported Katrina Environmental Research and Restoration Network Website at: http://kerrn.org/projects.html