The Ones That Get Away 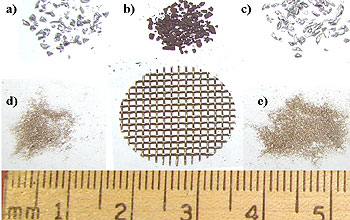 Researchers funded by the National Science Foundation (NSF) have found evidence that particles of lead solder used in plumbing may have sickened two Greenville, N.C., children, in one case at a child's home and in the other case, at a private daycare center.

The research team, from the Materials Use: Science, Engineering and Society (MUSES) collaboration at Virginia Polytechnic Institute in Blacksburg, suspects that standard water tests for detecting dissolved lead may not always identify some particles from leaded solder and other materials.

The team found that larger particles can get trapped in faucet aerator screens and never make it to test-sample containers. Yet these lead fragments still pose a hazard, particularly if they become dislodged. In addition, the researchers found that lead particles making it past the aerators can stick to the sampling containers. Once again, this removes toxic pieces from the water analysis.

The new data demonstrated that the actual water lead content was up to five times higher than amounts determined by the standard testing procedures.

According to collaborators Simoni Triantafyllidou, NSF CAREER Awardee Marc Edwards, and Jeffrey Parks, inadequate water testing likely results in misattribution of some lead poisoning cases to paint chips and other sources when tap water is the real culprit.

"Unfortunately," said Edwards, "in some very rare and unusual cases where levels of small lead particles in drinking water are high enough to cause lead poisoning, our standard test methods can also 'miss' much of the lead, thereby causing us to wrongly believe the water is more safe than it actually is."

Presenting the findings June 12, 2006, at the American Water Works Association Annual Conference in San Antonio, Texas, Triantafyllidou suggested that problems with sampling protocols may have led to delays in identifying the true source of the Greenville lead exposures and may obscure test results at other locations the team visited including Washington, D.C., and Durham, N.C.

Such health issues are a major component of the MUSES award, added Delcie Durham, working group leader for the NSF MUSES program. "The grant requires technological research," she said, "such as studies of pipe corrosion and its impact on water toxicology and potability, as well as social science research on issues of public health and safety and investigations into the aesthetics of tap water taste and smell."

The researchers collaborated with local health department officials who were initially perplexed because a thorough search could not identify the usual poisoning sources, such as leaded paint chips or leaded dust in the buildings the children frequented.

"This is a logical extension of Jeffrey Parks' prior work," added Edwards. "He discovered that routine sampling protocols could also miss particulate chromium in drinking water samples. The techniques that work fine for the typical water sample do not necessarily work for exceptional samples, and it is most certainly the rare exception when public drinking water can cause lead poisoning."