A Link Between Rainfall and Magnetism

They are nothing alike--except for their underlying mathematics 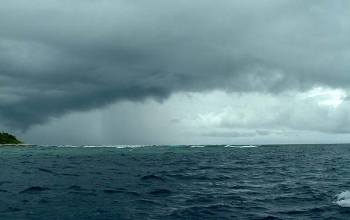 Both tropical rainfall and magnetism are described by the math of self-organized criticality.

Proving yet again that nature pays no attention to academic boundaries, two scientists at UCLA and the Santa Fe Institute have gained a deeper insight into rainfall patterns and atmospheric dynamics by using techniques originally developed for magnetic materials.

Writing in the June issue of the journal Nature Physics, physicist Ole Peters of the Santa Fe Institute and UCLA, and climatologist J. David Neelin of UCLA, argue that the onset of intense tropical rain can be described by the same mathematics as a piece of iron that's making the transition from unmagnetized to magnetized.

To illustrate the principle, explain the two scientists, whose work was funded by the National Science Foundation (NSF), the Department of Energy and the National Oceanic and Atmospheric Administration, imagine that you're dribbling rice grains onto a steadily accumulating mound of rice. Adding one more grain usually does nothing at all, except to make the pile a bit bigger. But eventually, as the sides of the pile get steeper, the balance becomes so precarious that a single falling grain can trigger an avalanche--sometimes even a catastrophic avalanche. At this point of "self-organized criticality," a tiny perturbation can produce a huge response.

So it is with an ordinary iron bar magnet that's near a certain critical temperature. At low temperatures, perturbations don't have much effect. Once the iron atoms in the bar have oriented themselves in the same direction, with their internal magnetic fields adding together, they like to stay that way; the bar is permanently "magnetized." But as the temperature goes up, meaning that the iron atoms are vibrating harder and harder, the disordering effects of the vibrations begin to overwhelm the forces that keep the atoms in line. At the critical temperature, the balance is so precarious that the slightest fluctuation can cause the entire magnet to switch north and south. Again, a tiny perturbation can produce a huge response.

And so it is with rainfall over the tropical oceans, explain the scientists, who based their conclusions on satellite remote sensing data. "The atmosphere has a tendency to move to a critical point in water vapor where the likelihood of rain dramatically increases," says Peters. "The system reaches a point where it's just about to rain; it's highly susceptible. Any additional water vapor can produce a large response."

One near-term payoff from this insight may be more accurate climate models, which currently have a tough time accurately representing precipitation.

"It's known that as water vapor increases" noted Neelin, "that there should be an onset of precipitation. These results tell us much more precisely how that transition occurs--which we can incorporate into atmospheric models".

For more information, see the UCLA news release at http://newsroom.ucla.edu/page.asp?RelNum=7142.