More than half of 7,000 current languages at risk of disappearing 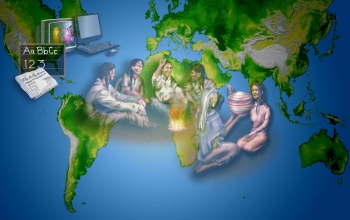 More than half the world's 7,000 human languages are headed for oblivion.

The National Endowment for the Humanities (NEH) and the National Science Foundation (NSF) today announced the awarding of 12 fellowships and 22 institutional grants in the two agencies' partnership on Documenting Endangered Languages (DEL). This is the second round of their multi-year campaign to preserve records of languages threatened with extinction. Experts estimate that more than half of the approximately 7,000 currently used human languages are headed for oblivion in this century. These new DEL awards, totaling $5 million, will support digital documentation work on more than 60 such languages.

No more than 20 speakers of Washo, a Native American language, remain, for example. They are elderly and scattered in several townships near the Nev.-Calif. border. There is little by way of a dictionary or grammar for the language. A new DEL grant will enable field workers from the University of Chicago and the Washo community itself to carry out comprehensive multimedia documentation of interviews with these last speakers. Seventeen endangered languages of Africa, the country recently highlighted by UNESCO as having the highest concentration of disappearing languages, will be documented under six other DEL awards.

"The immense diversity of linguistic data presents a unique opportunity to understand many aspects of human cognition," noted NSF Director Arden L. Bement, Jr. "I am pleased that researchers are responding with urgency, as well as with precision and thoroughness."

"Not only is this a time of great potential loss," said NEH Chairman Bruce L. Cole, "it is also a moment for enormous potential gain. In this modern age of computers and our growing technological capabilities, we can preserve, assemble, analyze, and understand unprecedented riches of linguistic and cultural information."

As part of the International Polar Year initiative, NSF is investing in the documentation and preservation of endangered languages in the Arctic, where approximately 70 percent of the spoken indigenous languages are highly endangered. Three projects covering six languages in Russia and Alaska will receive over $800,000 in DEL grants. Sealaska Heritage Institute will videotape 30 hours of narrative in Northern Haida, a language of Alaska and British Columbia that has only 14 remaining speakers. The first writing systems will be devised for two of the five endangered Eurasian languages to be documented by a new DEL project directed by Alexander Nakhimovsky of Colgate University.

One new DEL grant to the University of Texas at Austin will enable the Archive of the Indigenous Languages of Latin America (AILLA) to digitize and archive eight major collections of materials from prominent researchers on indigenous languages of Mexico, Costa Rica, Colombia, Venezuela and Brazil. A DEL fellowship will support Jeffrey Davis of the University of Tennessee in digitizing, translating, and assessing 19th century materials in the once widely used Plains Indian Sign Language that are housed at the Smithsonian Institution.

Already in June, 2006, a DEL grant to the University of Arizona is enabling Ofelia Zepeda and Susan Penfield to offer an intensive four-week course in language documentation and grant proposal preparation at the 27th American Indian Language Development Institute (AILDI). The goal is to increase the participation of tribal members in language documentation efforts. A DEL fellowship will allow Ellavina Perkins, a native speaker of Navajo, to complete a reference grammar of Navajo sentence structure; her project will involve teachers and community members in the summer workshops of the Navajo Language Academy. Another DEL grant will support a project directed by Jimm G. Goodtracks, one of only a half-dozen remaining semi-fluent speakers, to preserve and document the Baxoje Jiwere Nyut'chi dialects of the indigenous language of the Ioway ~ Otoe-Missouria. Two DEL fellowships will allow Anton and David Treuer, members of the Leech Lake Band of Chippewa, to document four different variants of the southwestern dialect of Chippewa (Ojibwe) in Wisc. and Minn.; the language is still spoken only by elders, and some communities have fewer than five remaining speakers.

A complete listing of this year's awards follows. (The number of awards and the amounts shown could still change slightly.)

Fellowships ($40,000 each, unless otherwise noted. Awarded by NEH):