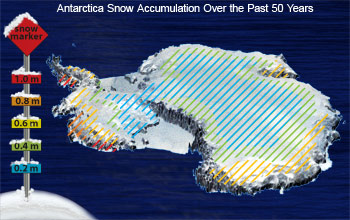 The overall amount of snowfall in Antarctica hasn't changed during the past 50 years.

For an animated graphic of snowfall variability across Antarctica and over time and b-roll of the U.S. ITASE traverse on Betacam SP, contact Dena Headlee (dheadlee@nsf.gov) (703) 292-7739.

The most precise record of Antarctic snowfall ever generated shows there has been no real increase in precipitation over the southernmost continent in the past half-century, even though most computer models assessing global climate change call for an increase in Antarctic precipitation as atmospheric temperatures rise.

"The year-to-year and decadal variability of the snowfall is so large that it makes it nearly impossible to distinguish trends that might be related to climate change from even a 50-year record," said Andrew Monaghan, a research associate with Ohio State University's Byrd Polar Research Center and lead author of an article on the topic published in the Aug. 10 edition of Science magazine.

"There were no statistically significant trends in snowfall accumulation over the past five decades, including recent years for which global mean temperatures have been warmest," Monaghan said.

The study looked at both the West Antarctic Ice Sheet (WAIS), a marine ice sheet with a base below sea level, and the much thicker East Antarctic Ice Sheet (EAIS) that sits atop dry land. In recent years, large volumes of ice along the WAIS coast have melted at a faster rate than previously seen. Some observers have blamed global warming for the melting and for the increased calving of icebergs along the continent's margin.

The 16 researchers from nine institutions in seven countries wanted to assemble a half-century-long record of snowfall back to the International Geophysical Year, or IGY. Work during the IGY began the first real modern study of the Antarctic continent and substantive research has continued there ever since. That work will continue in 2007-2008 during the upcoming International Polar Year (IPY), including NSF-funded studies of ice-sheet dynamics.

The research team coupled data from existing ice cores in the region, snow pits and networks of snow stakes, and meteorological observations. To these they added numerous new ice core records obtained by the International Transantarctic Scientific Expedition (ITASE), a 12-nation research program begun in 1990 and tasked with reconstructing the continent's climate history. NSF funded the U.S. component of ITASE.