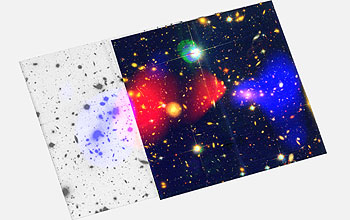 By observing a rare head-on collision of galaxies at 10 million miles per hour, astronomers have made the first direct detection of "dark matter"--the mysterious, invisible stuff that comprises at least one-quarter of the universe.

Scientists have known for 70 years that there is much more mass in galaxies than can be seen. For example, spiral galaxies rotate at speeds that are only possible if the total mass of the galaxy is several times larger than the total of its component stars and dust. The "missing" mass is the dark matter. But dark matter neither emits nor reflects light, and only interacts with ordinary matter through gravity. Consequently, its presence has only been inferred, not observed directly. Moreover, it typically accompanies and envelops ordinary matter, often in the form of a "halo" around galaxies, and is not found by itself.

Marusa Bradac of the Kavli Institute for Particle Astrophysics and Cosmology at Stanford, along with colleagues elsewhere, decided to hunt for dark matter by exploiting one of its few telltale visible effects: gravitational lensing. As Einstein predicted, mass curves space around it, and large masses curve it a lot. So light coming toward Earth from behind a large mass is bent by gravitationally curved space just as light in a telescope is bent by a curved lens. As a result, images of objects behind the mass are stretched. The amount of stretching is proportional to the quantity of mass warping space.

This effect is normally seen in areas where normal matter and dark matter coexist, and therefore it is hard to determine how much lensing is caused by dark matter alone. But Bradac's group decided to take advantage of the aftereffects of a titanic smash-up of two galaxy clusters about 3 billion light years away. The formation, collectively called the "bullet cluster," is actually the strewn-out remains of the wreck.

When the clusters hit each other, the vast volumes of gas in each cluster were slowed down by the impact. But the associated dark matter from each presumably continued to speed along unimpeded. That situation, the scientists reasoned, should provide a chance to "observe" dark matter separated from its ordinary counterpart. There should be two dark-matter regions moving in opposite directions, with two regions of hot gas lagging behind.

That is exactly what they found when they compared images from NASA's Chandra X-ray Observatory, the Hubble Space Telescope and other instruments. The clumps of hot, shocked gas from the collision--visible through their X-ray emissions--were in a separate part of the sky from the greatest lensing, which was caused by the unseen dark matter. The result, the researchers say, constitutes the first direct detection of dark matter.

For more information, see the news releases from Stanford University, and from NASA.