Some models predict recovery by 2060 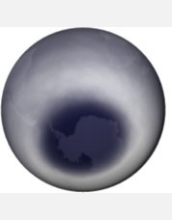 Twenty years ago this month, government and university scientists ventured to Antarctica to study the cause of a hole in the stratospheric ozone layer over the southernmost continent. Those observations were the first definitive demonstration that humans are capable of affecting the entire global climate system and led to the Montreal Protocol, the first treaty to address the Earth's environment.

Today, Susan Solomon and David Hoffman, who led the research team, met with colleagues from the National Oceanic and Atmospheric Administration (NOAA) and the National Science Foundation (NSF) at a news briefing in Washington, D.C., to reflect on the importance of the finding and discuss its implications for the future.

"The patient hasn't recovered," said Hoffman, who heads NOAA's global atmospheric monitoring program. "But it's not getting any sicker. We really have not seen any recovery in Antarctica," he said.

Hoffman also predicted it would take until 2060 for the ozone layer to heal completely, provided humans stop all release of man-made substances containing chlorine or bromine.

Their work began in 1986, when NSF, NOAA and NASA rapidly put together a research team, known as the National Ozone Expedition, or NOZE.  The purpose was to discover the cause of a confimed depletion of ozone in the Earth's atmosphere over Antarctica. In just two months, the team led by Solomon of NOAA and Hoffman, who was then at the University of Wyoming, learned most of what we know about the ozone hole, especially the role of chlorofluorocarbons, or CFCs, in destroying the ozone layer--which protects the Earth from ultraviolet radiation.

The danger of ozone destruction, they said, is increased risk of cancers and cataracts, and mutations in wildlife. Although CFCs are considered greenhouse gases, like carbon dioxide, they are not a major cause of global warming.

International negotiators meeting in Canada in 1987 produced the Montreal Protocol, which was ratified by 29 countries and the EEC in 1989, and called for a phase-out of CFC production in industrialized countries.

Solomon was later awarded the National Medal of Science for her work.

NOZE took place during a time when investigating Antarctica was mostly the work of explorers, said Erick Chiang, who is in charge of U.S. Antarctic operations, logistics, telecommunications, science support and construction at NSF. In the 1980s, dog teams were used for transportation and communications were sent north by a 75 baud teletype machine. Visitors were required to have their wisdom teeth removed to prevent dental problems, and power of attorney was assigned to someone back home--just in case.  And no one had tried to fly in a research expedition in August, as they did for NOZE.

"Planning for supporting the ozone expedition has really been a model to support research in Antarctica," said Chiang.

Now, Chiang said, infrastructure for scientific research in Antarctica is state of the art. "We now have the ability to access the continent and move around on it like never before," he said. Vast improvements in technology, transportation and creature comforts are now able to support the ambitious research themes of the upcoming International Polar Year (IPY). The White House Office of Science and Technology Policy has identified NSF as the lead federal agency for coordinating U.S. IPY activities.

Extending from March 2007 through March 2009, IPY is envisioned as an intense scientific campaign to explore new frontiers in polar science, improve our understanding of the critical role of the polar regions in global processes, and educate the public about the polar regions. NSF has identified climate research as two of its three emphasis areas for the upcoming International Polar Year (IPY).

The polar ice sheets are dynamic features, for example, intimately connected with global climate change and sea level. The West Antarctic Ice Sheet, for instance, shows signs of instability due to climate change. Warming could trigger its rapid collapse and possibly raise sea level worldwide by as much as 20 feet.

In the Arctic, NSF supports Summit Camp, located at the peak of the Greenland ice sheet. Year-round operations study air-snow interactions, knowledge of which is crucial for interpreting data from ice cores drilled in the area and elsewhere.

During the past few decades, the Arctic has experienced significant environmental changes that could have broad-reaching consequences for human populations in the form of long-term impacts on local ecosystems, as well as on global climate. These environmental changes are thought to arise from a complex interplay of physical drivers of oceanic, atmospheric and terrestrial origin and appear to be correlated with changes in the Polar Vortex and other related phenomena. It is not known whether these changes are cyclical, indicating the system may eventually return to a more familiar state, or if they represent a trend that indicates the Arctic may be changing. Similarly, human and natural contributions to the changes are not fully understood.

In 2005, NOAA also identified Summit as a very good location for monitoring springtime Arctic ozone depletion within the stratosphere in the North. Together with NSF, they launched a balloon campaign when it appeared a substantial depletion could occur. Fortunately, the vortex became disturbed before an ozone hole could form in 2005, but additional measurements were taken in 2006 and are planned for 2007.

A third research area will look at adaptations to life in extreme cold and prolonged darkness. Organisms that are adapted to polar regions often exhibit unique strategies for survival in environments with extremes of low temperatures and wide ranges in annual light. Recent climate changes may expose polar organisms to greater variability in temperature and light than they have experienced in the past. For most polar organisms, little is known about the mechanisms that control their adaptations to environmental change at the cellular and genetic levels.