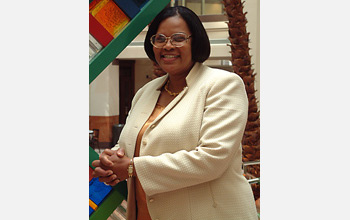 The National Science Foundation (NSF) has named Wanda E. Ward acting assistant director for its Directorate for Education and Human Resources (EHR). With over 14 years of NSF experience, Ward brings dedicated leadership to EHR and its mission to achieve excellence in U.S. science, technology, engineering and mathematics education.

During her tenure at NSF, Ward has served in a number of science and engineering policy, planning and program capacities in both EHR and the Office of the Director. Ward serves as deputy assistant director for NSF's Directorate for Social, Behavioral and Economic Sciences (SBE). In SBE, Ward provided critical leadership for development of several NSF-wide activities, including the Human and Social Dynamics priority area, the Science of Learning Centers program, Cyberinfrastructure and the Social Sciences, and the ADVANCE program.She also directed the launch and development of a major activity in SBE to broaden participation through strategic, regional alliances among the top 25 institutional producers of underrepresented minorities at the B.S. and Ph.D. levels. These endeavors led her to forge key international research and workforce development collaborations in both developed and developing nations.

Ward has also served on the President's National Science and Technology Council subcommittees and interagency working groups in the areas of science education and workforce development, and the social, behavioral and economic sciences.

Ward was awarded a Ford Foundation Fellowship and the 2005 American Psychological Association (APA) Presidential Citation, the most distinguished honor given by the APA president. The APA award recognized her steadfast support of the advancement of behavioral science and her to devotion to enhancing the diversity of the science and engineering workforce.

Ward, who assumed her position as acting head of EHR on Aug. 18, 2006, manages an annual budget of approximately $800 million.