Water is saltier during cold, fresher with tropical rain 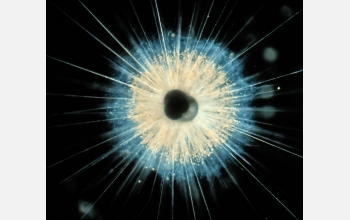 A living planktonic foramanifera from subtropical waters of the Atlantic Ocean.

Sudden decreases in temperature over Greenland and tropical rainfall patterns during the last Ice Age have been linked for the first time to rapid changes in the salinity of the north Atlantic Ocean, according to research published Oct. 5, 2006, in the journal Nature. The results provide further evidence that ocean circulation and chemistry respond to changes in climate.

Using chemical traces in fossil shells of microscopic planktonic life forms, called formanifera, in deep-sea sediment cores, scientists reconstructed a 45,000- to 60,000-year-old record of ocean temperature and salinity. They compared their results to the record of abrupt climate change recorded in ice cores from Greenland. They found the Atlantic got saltier during cold periods, and fresher during warm intervals.

"The freshening likely reflects shifts in rainfall patterns, mostly in the tropics," Howard Spero of the University of California at Davis said. "Suddenly, we're looking at a record that links moisture balance in the tropics to climate change. And the most striking thing is that a measurable transition is happening over decades."

Spero, who is currently on leave at the National Science Foundation's Marine Geology and Geophysics Program, worked with lead author Matthew Schmidt of the Georgia Institute of Technology and Maryline Vautravers of Cambridge University in the United Kingdom to conduct the research.

During the Ice Age, much of North America and Europe was covered by a sheet of ice. But the ice records the scientists reconstructed show repeated patterns of sudden warming, called Dansgaard-Oeschger Cycles, when temperatures in Greenland rose by 5 to 10 degrees Celsius over a few decades.

Close to the tropics, warm, moist air forms a zone of heavy tropical rainfall, called the Intertropical Convergence Zone, which dilutes the salty ocean with fresh water. Today, the tropical rainfall zone reaches into the northern Caribbean, but during the colder periods of the Ice Age it was pushed much further south, towards Brazil. That kept fresh water out of the northern Atlantic, so it became more salty, Spero said.

The new results show that as the climate cooled in Greenland, salinity rapidly increased in the North Atlantic subtropical gyre. The build-up of salt during these cold intervals when the conveyor circulation was reduced would have primed the system to quickly restart on transitions into warm intervals, Schmidt said. However, the actual trigger that caused Atlantic circulation to restart during the Ice Age is still unknown, he said.

Once warming began, melting ice sheets would have contributed fresh water to the Atlantic, but this would have been partly buffered by the elevated saltiness of the Atlantic.