"Killer" B Cells Provide New Link in the Evolution of Immunity 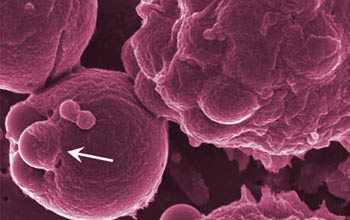 The trout cell in the lower left is in the process of engulfing tiny latex beads (arrow).

Researchers from the University of Pennsylvania School of Veterinary Medicine have discovered a unique evolutionary link between the most primitive innate form of immune defense, which has survived in fish, to the more advanced, adaptive immune response present in humans and other mammals.

The finding, which appears in the online version of the October issue of Nature Immunology, represents an evolutionary step for the mammalian immune system and offers a potential new strategy for developing much-needed fish vaccines.

In the adaptive immune system in mammals, B cells produce antibodies to fight infection. In the more-primitive innate immunity in fish, the scientists found that B cells take part in a process known as phagocytosis, by which immune system cells ingest foreign particles and microbes.

In modern mammals, the B cell is a highly adapted part of the immune system chiefly responsible for, among other things, the creation of antibodies that tag foreign particles and microbes for destruction.

"When examining fish B cells we see them actively attacking and eating foreign bodies, which is a behavior that, according to the current dogma, just shouldn't happen in B cells," said J. Oriol Sunyer, a professor in Penn Vet's Department of Pathobiology and leader of the research team.

The researchers determined that these attack B cells account for more than 30-40 percent of all immune cells in fish, whereas phagocytic cells make up only a small portion of the total number of immune cells in mammals.

According to Sunyer, the findings are important for not only understanding the evolution and function of immune cells in fish but also may point to novel roles of B cells in mammals. Their findings also have an agricultural implication. Vaccines currently given to farmed salmon, for example, appeal to the fish's adaptive immune response, which this research now shows to be a small part of the overall fish immune system.

Funding for this research was provided by the National Science Foundation and United States Department of Agriculture.

The full University of Pennsylvania news release is posted at http://www.upenn.edu/pennnews/article.php?id=1009.