More Than a Meteor Likely Killed Dinosaurs 65 Million Years Ago 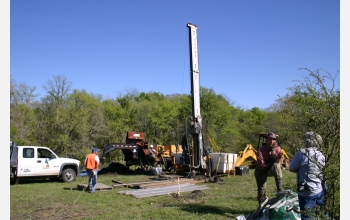 Growing evidence shows that the dinosaurs and their contemporaries were not wiped out by the famed Chicxulub meteor impact alone, according to a paleontologist who says multiple meteor impacts, massive volcanism in India and climate changes culminated in the end of the Cretaceous Period.

The Chicxulub impact may have been the lesser and earlier of a series of meteor impacts and volcanic eruptions that pounded life on Earth for more than 500,000 years, say Princeton University paleontologist Gerta Keller and her collaborators Thierry Adatte from the University of Neuchatel, Switzerland, and Zsolt Berner and Doris Stueben from Karlsruhe University in Germany.

A final, much larger and still unidentified impact 65.5 million years ago appears to have been the last straw, said Keller, exterminating two-thirds of all species in one of the largest mass extinction events in the history of life. It's that impact - not Chicxulub - that left the famous extraterrestrial iridium layer found in rocks worldwide that marks the impact that finally ended the Age of Reptiles, Keller believes.

Keller is scheduled to present that evidence at the annual meeting of the Geological Society of America (GSA) in Philadelphia, on Tuesday, October 24, 2006.

"Chicxulub is one of thousands of impact craters on Earth's surface and in its subsurface," said H. Richard Lane, program director in the National Science Foundation (NSF) Division of Earth Sciences, which funded the research. "The evidence found by Keller and colleagues suggests that there is more to learn about what caused the major extinction event millions of years ago, and the demise of the dinosaurs at the end of the Cretaceous."

Marine sediments drilled from the Chicxulub crater itself, as well as from a site in Texas along the Brazos River and from outcrops in northeastern Mexico, reveal that Chicxulub hit Earth 300,000 years before the mass extinction. Microscopic marine animals were left virtually unscathed, said Keller.

"In all these localities we can analyze their microfossils in the sediments directly above and below the Chicxulub impact layer, and cannot find any significant biotic effect," said Keller. "We cannot attribute any specific extinctions to this impact."

The story that seems to be taking shape, according to Keller, is that Chicxulub, though violent, actually conspired with the prolonged and gigantic volcanic eruptions of the Deccan Flood Basalts in India, as well as with climate change, to nudge species towards the brink. They were then pushed over with a second large meteor impact.

The Deccan volcanism released vast amount of greenhouse gases into the atmosphere over a period of more than a million years leading up to the mass extinction. By the time Chicxulub struck, the oceans were already 3-4 degrees warmer, even at the bottom, Keller said.

"On land it must have been 7-8 degrees warmer," she said. "This greenhouse warming is well-documented. The temperature rise was rapid over about 20,000 years, and it stayed warm for about 100,000 years, then cooled back to normal well before the mass extinction."

Where's the crater? "I wish I knew," said Keller.

Scheduled Presentations at the Geological Society of America meeting in Philadelphia: