Fishing can promote boom and bust swings in supply 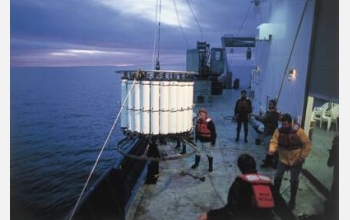 Oceanographers deploy an instrument as part of a study of the marine environment off California.

For the first time, research has shown that fishing can promote boom and bust swings in supplies of targeted fish stocks.

The results, published in the October 19 issue of the journal Nature, are based on data obtained by the California Cooperative Oceanic Fisheries Investigations (CalCOFI), a program through which scientists have investigated the ecological conditions of the California Current for more than half a century.

The study shows that beyond the potential for fishery exploitation to cause declines in fish stocks, fishing carries with it a "double jeopardy" impact by amplifying the highs and lows of natural population variability. This "double jeopardy" increases uncertainty in estimating population levels and could put fisheries at greater risk of collapse than previously believed.

The research was conducted by scientists at the Scripps Institution of Oceanography at the University of California at San Diego, the Southwest Fisheries Science Center of the U.S. National Marine Fisheries Service, Imperial College, London, and the University of Oxford. It was funded by the National Science Foundation (NSF), the National Oceanic and Atmospheric Administration (NOAA) National Marine Fisheries Service, the Deutsche Bank Complexity Studies Fund and the Sugihara Family Trust.

"This study shows that there is significant value in conducting long-term ecological research in the oceans," said Philip Taylor, director of NSF's Biological Oceanography Program, which, along with NSF's Long-Term Ecological Research Program, funded the research. "There are risks in not taking fish population variability and fish population age structure into account because they impact the resilience of future fish generations. A ton of fish of the very largest sizes has far more value to future populations if preserved than a ton of smaller fish, which contribute far less to reproduction."

Theoretical debates have swirled for decades about how much impact commercial fishing activities have on the fish populations they target. Recent studies have shown that many commercially important fish populations have declined over the past several decades, but how much can be traced to fishing rather than environmental influences?

"We found that the variability of the targeted populations was much higher, meaning that fishing tends to amplify both the peaks and the valleys of population numbers," said George Sugihara, a co-author of the paper and an oceanographer at Scripps. "Fishing can potentially not only lead to declining stock levels, but cause populations to fluctuate more through time, which could put them at greater risk of collapse than previously thought."

The researchers differentiated between environmental and fishing impacts by analyzing the populations of exploited versus unexploited species living in the same environments. Normally this comparison cannot be made with traditional fisheries data based on "landings" records, as there are no landings records for unfished species.

The CalCOFI data was unique in this regard because it gathered information on larval abundances of both fished and non-fished species. Larval abundance is an indicator of adult abundance. The study analyzed the quantity of larval fish recorded during research expeditions to study the California Current, the large current originating in the northern Pacific Ocean that flows along the western coast of North America.

The scientists believe that the reason fished populations become more variable is because fishing selectively culls the larger, older individuals, thereby removing the fish that are more able to buffer random environmental variation. These individuals also tend to be the most reproductively active.

As fishing proceeds, there is a tendency for the size and age of individuals in the population to decline, potentially leaving a stock of near-juveniles that are less able to cope with environmental events such as El Niño.

"This suggests that fisheries need to be managed not only to maintain a harvest target or total biomass level, but also to maintain a certain age structure in the stock," said Sugihara, who believes that the fluctuations identified precede systematic declines of populations: they can be viewed as a kind of early warning sign prior to collapse.