May lead to better understanding of human behavior 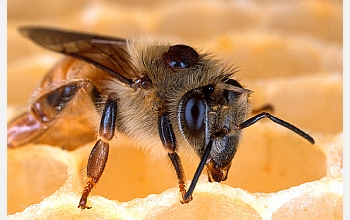 The 1 million neurons in the brain of a honey bee control an array of complex social behaviors.

Using a new combination of techniques, U.S. and European scientists have identified 36 genes that encode brain chemicals likely to play a role in the complex behaviors of the honey bee--from working in and defending the hive to foraging, displaying and interpreting dance language. Understanding the jobs these chemicals, called neuropeptides, carry out in the honey bee will help researchers understand what they do in humans, the scientists said.

Some 10,157 genes have so far been identified in the recently sequenced honey bee (Apis mellifera) genome. Jonathan Sweedler at the University of Illinois at Urbana-Champagne and his coworkers in Belgium report in the Oct. 27, 2006, issue of the journal Science they identified 36 honey bee genes that encode 100 neuropeptides. The insect's brain contains 1 million neurons--several of the organs would fit on the head of a pin--which are bathed in neuropeptides that influence the animal's vast array of behaviors.

The group used a new combination of methods that included genetic analysis, powerful computing programs and mass spectrometry to make the discoveries. Determining the gene that encodes a neuropeptide, which is a smallish protein, is harder than in most instances because the protein molecules are often so dramatically modified they no longer show any relationship to their "parent" gene.

Sweedler says his blended technology approach to peptide discovery holds promise for finding the molecules in the large number of genomes of other species currently being sequenced.