Mercury to Transit the Sun

Celestial event can be seen live via webcast 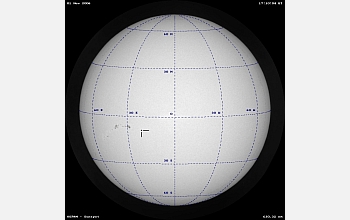 An edited image from the OSPaN telescope shows the relative size of Mercury compared to the sun.

On Nov. 8, 2006, Mercury will pass directly between the sun and the Earth, a transit that will cause the tiny, innermost planet to appear as a small black shadow moving across the bright solar disk.

A special event at Kitt Peak National Observatory near Tucson, Ariz., will offer the public a unique opportunity to view the transit, which is invisible to the naked eye, in real-time through the observatory's specially filtered, 16-inch, public-outreach telescope.

From moments before the transit begins at 2:12 p.m. Eastern time, through its conclusion 5 hours later, anyone with access to the Internet will see the small planet's shadow slowly pass across the sun. A media team from the National Science Foundation-supported Exploratorium in San Francisco will webcast the live event.

To watch the event, go to: www.exploratorium.edu/transit

At the top of every hour, commentary and interviews with Kitt Peak astronomers will provide context to the celestial event. Andrew Potter of NSF's National Solar Observatory (NSO) will share how the world's largest solar telescope--Kitt Peak's McMath-Pierce Solar Telescope--is allowing him to make special observations of Mercury's thin atmosphere against the backdrop of the sun and its known spectral signature.

Potter will also use NSF's high-resolution Richard B. Dunn Solar Telescope, located at the NSO's Sunspot, N.M., observatory atop Sacramento Peak, to search for traces of a sodium atmosphere around Mercury. Kevin Reardon of Osservatorio di Arcetri in Arcetri, Italy, will use the same facility to observe the sun's features, using Mercury as a knife edge to enhance spatial resolution. Both observations will use a special, tunable imaging instrument provided by Arcetri.

The aptly named Sunspot is also the location of the U.S. Air Force's Optical Solar Patrol Network (OSPaN) telescope, a semi-autonomous patrol telescope supporting space weather studies and forecasts that is operated in collaboration with the NSO. During the transit, scientists will collect near real-time images and movies, eventually posting the latest at: http://nsosp.nso.edu/data/latest_solar_images.html.

Scientists across the globe will be monitoring the transit closely. This event will not occur again until May 9, 2016.

Additional information is available from the press releases linked below.

About Kitt Peak:
Press release: http://www.noao.edu/outreach/press/pr06/pr0612.html
Part of the National Optical Astronomy Observatory (NOAO), Kitt Peak National Observatory is operated by the Association of Universities for Research in Astronomy Inc. (AURA) under a cooperative agreement with NSF. It is located 55 miles southwest of Tucson, Arizona, in the Quinlan Mountains on the Tohono O'odham Nation. The McMath-Pierce telescope on Kittt Peak is part of the National Solar Observatory, also operated by AURA for NSF. For more information about the Kitt Peak Visitor Center, visit www.noao.edu/outreach or call the Visitor Center at (520) 318-8726.

About the Exploratorium:
The Exploratorium, based in San Francisco, is a collage of hundreds of science, art and human-perception exhibits. A leader in the movement to promote museums as informal education centers, The Exploratorium operates as a research and development center for the science museum field in addition to serving museum audiences. The Exploratorium website has been online since 1993 and now contains an array of over 18,000 items. The National Science Foundation has been supporting educational efforts at the Exploratorium since the early 1990s.

About the National Solar Observatory:
The mission of the National Solar Observatory is to advance knowledge of the sun, both as an astronomical object and as the dominant external influence on Earth, by providing forefront observational opportunities to the research community. The mission includes the operation of cutting edge facilities, the continued development of advanced instrumentation both in-house and through partnerships, conducting solar research, and educational and public outreach. Observatories are located at Sunspot, N.M., Kitt Peak, Ariz. and around the world as the Global Oscillation Network Group.

Related Websites
Additional images from the transit collected by the NOAO are available at: http://www.noao.edu/image_gallery/html/im1019.html