Gene found in liver and kidney takes on additional work 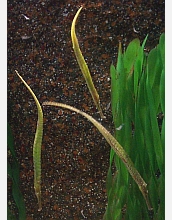 Scientists have discovered a new function for an "old" gene in pipefish.

Genetic archaeology is providing a new clue to one of the greatest gender mysteries in the fish world: how did male pregnancy evolve in a family of fish?

A gene discovered in the gulf pipefish hints that a gene already busy with kidney and liver function may have learned new tricks in the male womb, said April Harlin-Cognato, a biologist at Michigan State University, and her colleagues. Their research results, funded by the National Science Foundation (NSF), are published in this week's online edition of the journal Proceedings of the National Academy of Sciences (PNAS).

"We're interested in the evolution of novelty and how novel traits evolve," Harlin-Cognato said. "Why is this the only fish that exhibits male pregnancy? It's one of the more difficult phenomena to explain in evolutionary biology, and we're wondering if it's a matter of old genes learning new tricks."

Gulf pipefish are a member of the same family as seahorses. They look like seahorses without the curved tails. As in seahorses, male pipefish accept eggs from the females, fertilize them and carry them in pouches. These brood pouches have evolved into complex organs able to nurture and protect the eggs.

Harlin-Cognato, who conducted the research along with Eric Hoffman of the University of Central Florida, and Adam Jones of Texas A&M University, found a new type of gene that codes for a protein called astacin, which performs a variety of functions in bony fish.

Through the course of evolution, some genes are copied. The copies can take on different functions while the original continues to perform the initial functions. However, this new gene, which Harlin-Cognato's team dubbed "patristacin" in deference to its suspected fatherly functions, is not a copy. Instead, it is likely a second job for astacin.

The researchers suspect that in its early days, possibly thousands of years ago, a patristacin gene likely assisted in kidney and liver function. They think it's possible the gene was drafted into supporting the then-newfangled male brood pouch. Eventually, patristacin became productive at its second job.

"These researchers have made a strong case that this gene is not a new one, but an old gene that has taken on additional work," said Michael Beecher, a program director in NSF's Division of Integrative Organismal Biology, which funded the research.

"We think it was a case of 'genetic moonlighting,'" Harlin-Cognato said. "Genes show you ancestry. They show you the overall family tree and can tell you when things took place during the evolution of a new structure. We're looking at the endpoint and trying to figure out its origin. It's like doing genetic archaeology."