Chilean, Swedish, and U.S. scientists and teachers break the ice 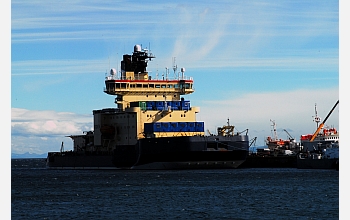 An international team of scientists and teachers has sailed from Punta Arenas, Chile for a two-week, U.S. National Science Foundation-sponsored research cruise aboard the Swedish icebreaker Oden, in one of the first collaborative activities of the International Polar Year (IPY) 2007-2008. IPY is a global campaign of research in the Arctic and Antarctic.

Oden left Punta Arenas, historically a gateway city for Antarctic research, on Dec. 12, 2006. On its way south, the ship will transit the Drake Passage between South America and Antarctica, and then follow the Antarctic Peninsula and the coastline of the southernmost continent before entering the Ross Sea.

Along the way, scientists from the U.S., Sweden and Chile will conduct a variety of observations, while two classroom educators selected by the U.S. National Science Foundation (NSF), and a Swedish teacher selected by the Swedish Polar Research Secretariat will work alongside a Chilean colleague and the scientists. The teachers also will interact with students at home, using shipboard telecommunications to file journals and conduct teleconferences, bringing the excitement of polar research to life for the next generation.

Through the Arctic Research Consortium of the United States (ARCUS), teachers aboard the Oden will be taking part in a series of Web seminars for their colleagues in the U.S. and elsewhere in the world. The next one-hour "webinar" is scheduled for Wednesday, Dec. 20, 2006, at 1:00 p.m. EST.

The webinar interface, HorizonWimba, allows presentation of PowerPoint slides over the Internet during a conference call and includes online chat and polling features. To take full advantage of the webinar, users need telephone and Internet access. Those without Internet access can join the conference call. Each webinar will be archived online after the completion of the live session. Instructions on how to view an archived event will be posted on the ARCUS PolarTREC website and emailed to all registered participants. Information about registering for the event is available from the site: http://www.polartrec.com

PolarTREC is an NSF-funded initiative.

The research will include various projects undertaken by the international science team. The scientists will obtain data on the biological and chemical oceanography of these relatively unstudied regions, including such variables as nutrients, chlorophyll, and carbon dioxide, and will also test for the presence of man-made contaminants. This information will be paired with physical measurements that provide clues to water mass movement and sea ice formation, and observations that document the presence and behavior of marine mammals and seabirds.

Scientists will work closely with educators and media to inform the public about ocean research in Antarctic waters and to develop educational materials for use in classrooms worldwide.

"This kind of research is a major achievement," said José Retamales, director of the Chilean Antarctic Institute. "Especially with the participation of scientists and educators of three different nations, I hope we will see a lot more of this kind of collaboration during and beyond the IPY. To study phenomena in Antarctica is definitely a matter that is complex enough to require the support of not just one country but many."

Oden is eventually headed for McMurdo Station, Antarctica, the logistics hub for the U.S. Antarctic Program. Once the ship arrives at McMurdo, around Dec. 24, 2006, it will disembark the scientists and teachers and begin the work of breaking and maintaining a channel through the sea ice of McMurdo Sound to allow the annual supply and fuel ships to reach McMurdo.

During the transit to McMurdo Station, the Oden is operated by the Swedish Polar Research Secretariat. NSF is chartering the ship to conduct its annual Antarctic ice-breaking operations.

"With International Polar Year set to begin in the spring of 2007, this expedition demonstrates the spirit of cooperation among Antarctic national programs and a sign of greater collaborations to come," said Karl Erb, director of Polar Programs at NSF.

Officials of the three nations involved hope that the cruise will create strong and lasting bonds between scientists and educators that will become the basis of a positive and lasting IPY legacy.