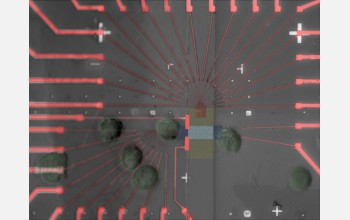 An area no bigger than a white blood cell (greenish circles) contains the 160,000 bit memory array.

Researchers have created an ultra-dense memory device the size of a white blood cell that has enough capacity to store the Declaration of Independence and still have space left over. The accomplishment represents an important step toward the creation of molecular computers that are much smaller and could be more powerful than today's silicon-based computers.

"Using molecular components for memory or computation or to replace other electronic components holds tremendous promise," said J. Fraser Stoddart, who is the Fred Kavli Chair in Nanosystems Science at UCLA and director of the California NanoSystems Institute.

The 160,000 memory bits are arranged like a large tic-tac-toe board: 400 silicon wires crossed by 400 titanium wires, each 16 nanometers wide, with a layer of dumbbell-shaped molecular switches sandwiched between the crossing wires.

"This research is one of the only examples of building large molecular memory in a chip at an extremely high density, testing it, and working in an architecture that is practical, where it is obvious how information can be written and read," Stoddart said.

Stoddart, his collaborator James R. Heath, the Elizabeth W. Gilloon Professor of Chemistry at the California Institute of Technology, and their research teams report the work in the January 25 issue of the journal Nature.

According to a fundamental computing tenet known as Moore's law, the complexity of an integrated circuit, or computer chip, will double every year. That means the electronics industry won't achieve a device density comparable to what the research team produced until about 2020--provided companies can figure out how to do it. But, the report says, manufacturers currently see no way to extend the miniaturization beyond the year 2013.

"Our goal was not to demonstrate a robust technology; the memory circuit we have reported on is hardly that," said Heath. "Instead, our goal was to demonstrate that large-scale, working electronic circuits could be constructed at a density that is well-beyond (10-15 years) where many of the most optimistic projections say is possible."

"Molecular switches will lead to other new technologies beyond molecular electronic computers," Stoddart said; "it is too soon to say precisely which ones will be the first to benefit, but they could include areas such as health care, alternative energy, and homeland security."

The research was funded primarily by the National Science Foundation and the Defense Advanced Research Projects Agency.