Research offers insights into the complexity of ecological interactions 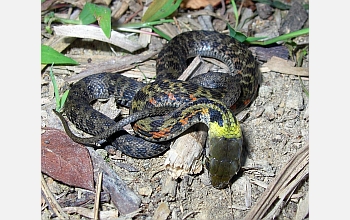 Most snakes are born with poisonous bites they use for defense. But what can non-poisonous snakes do to ward off predators?

What if they could borrow a dose of poison by eating toxic toads, then recycling the toxins?

That's exactly what happens in the relationship between an Asian snake and a species of toad, according to a team of researchers funded by the National Science Foundation (NSF) Division of Integrative Organismal Systems (IOS).

Herpetologists Deborah Hutchinson, Alan Savitzky of Old Dominion University in Norfolk, Va., and colleagues published results of research on the snake's dependence on certain toads in this week's online issue of the journal Proceedings of the National Academy of Sciences.

Hutchinson studied the Asian snake Rhabdophis tigrinus and its relationship to a species of toxic toad it eats. In the PNAS paper, she and co-authors describe dietary sequestration of toxins by the snakes. The process allows the snakes to store toxins from the toads in their neck glands. When under attack, the snakes re-release the poisons from these neck glands.

Many invertebrates sequester dietary toxins for use in defense, including milkweed insects and sea slugs. But vertebrate examples of toxin sequestration, especially from vertebrate prey, are rare. "A snake that's dependent on a diet of toads for chemical defense is highly unusual," said Hutchinson.

Hutchinson said the research had identified six compounds in the snakes that may hold promise in medical treatments for people suffering from hypertension and related blood pressure disorders.

The researchers made their case by testing Rhabdophis tigrinus on several Japanese islands, one with a large population of the toxic toads and another with none, and compared them with snakes from the Japanese island of Honshu, where toads are few. The presence of toxins in the snakes' neck glands depended upon their access to the toads.

Snakes without the borrowed toxins were more likely to turn and flee from danger than to hold their ground and perform a toxin-releasing defensive maneuver.

"Sequestration of toxins in a specialized [neck gland] structure in a vertebrate is a remarkable finding," said William Zamer, IOS deputy director at NSF. "This finding offers new insights into the complex mechanisms underlying ecological relationships and will lead to important insights about fundamental biological questions."