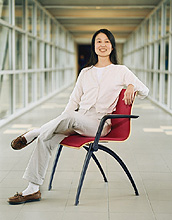 The National Science Foundation (NSF) has chosen Jeannette Wing, president's professor and head of the Computer Science Department in Carnegie Mellon University's School of Computer Science (SCS), as assistant director for Computer & Information Science and Engineering (CISE) at NSF. She will begin her new position on July 1, 2007.

In the post, Wing will guide and manage funding for the federal agency that supports research in computer and information science and engineering. With a budget of over $527 million, CISE provides 86 percent of all federally funded research in computer science. In addition to research support, the CISE directorate contributes to the education and training of future generations of computer scientists and engineers.

"Over the past two decades, the Internet has transformed the practice of science, the shape of business, and the life of people around the world," said NSF Director Arden L. Bement, Jr. "The speed of this transformation is breathtaking, as new applications emerge in months not years. Jeannette Wing will bring enormous vision and ability to continue the transformation and enable the United States to uphold a position of world leadership in computing, communications, and information science and engineering."

"Jeannette Wing is one of the most original and creative scientists in computing today," said Carnegie Mellon President Jared L. Cohon. "She has made superb contributions here as a researcher, teacher and administrator. NSF could not have made a better choice for this pivotal leadership role."

Wing has been the head of Carnegie Mellon's Computer Science Department since 2004, overseeing an operation that includes 90 faculty, 150 doctoral students, 540 undergraduates and 35 administrative staff. She is highly regarded for her outstanding contributions in research and teaching, as well as administrative service.

In research, Wing is an international leader in the area of formal methods--the use of mathematical models and logics to specify and reason about computing systems. Wing and her colleagues have made fundamental contributions to many areas of computer science, including abstract data types, object-oriented programming, concurrent systems and fault-tolerant distributed systems. Since 2001, she has been director of Carnegie Mellon's Specification and Verification Center, which conducts research in new advances in formal methods and their applications to safety-and mission-critical systems.

More recently, she has turned her attention to trustworthy computing with a focus on software security. She is especially interested in how system components not originally designed to work in concert can lead to surprising behavior when combined. Computer hackers can exploit these unexpected interactions to their advantage. These kinds of software design vulnerabilities are of great interest to companies like Microsoft Corporation, where Wing worked during a sabbatical in 2003.

Wing is an alumna of the Massachusetts Institute of Technology, where she earned bachelor's and master's degrees in electrical engineering and computer science in 1979, and a doctorate in computer science in 1983. She began her career as an assistant professor at the University of Southern California and joined the Carnegie Mellon faculty in 1985. She has worked or consulted for AT&T Bell Laboratories, Xerox Palo Alto Research Laboratories, Digital Equipment Corp., USC/Information Sciences Institute, the Jet Propulsion Laboratory and Microsoft Corp.

Wing is the author or co-author of more than 100 refereed publications and has presented more than 200 talks before academic, corporate and government audiences. She has been or is on the editorial boards of nine scientific journals, including the Journal of the Association for Computing Machinery (ACM). She is a member of the National Academies of Sciences' Computer Science and Telecommunications Board and Microsoft's Trustworthy Computing Academic Advisory Board. She is an elected member-at-large on the ACM Council.

Wing has served on many advisory boards, including those for the Defense Advanced Research Projects Agency and NSF. She is a member of Eta Kappa Nu, Tau Beta Pi, Sigma Xi and Phi Beta Kappa. She is a fellow of the ACM and the IEEE.

Wing greatly enhanced the educational programs offered in Carnegie Mellon's SCS, revamping curricula and developing courses that are being taught to this day in far-flung distance learning programs.

"We at Carnegie Mellon have benefited greatly from Jeannette's leadership and service," said Randal E. Bryant, dean of SCS. "Her leadership style, combining boundless energy and enthusiasm with a concern for the well-being of everyone, motivates us all to do a better job. Her recent formulation of 'computational thinking,' conveying how the field of computer science is driven by a core set of intellectual concepts, has set a new tone for the role of computer science in the research community. Although she will be missed at Carnegie Mellon, we are glad to see the leadership of computer science research at the NSF in such good hands."