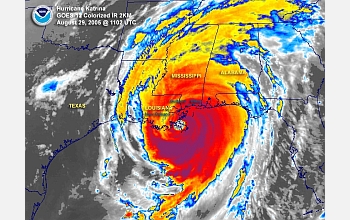 New evidence supports the theory that global warming has contributed to stronger hurricanes.

Atmospheric scientists have uncovered fresh evidence to support the theory that global warming has contributed to the emergence of stronger hurricanes in the Atlantic Ocean. But the trend doesn't hold up in the world's other oceans.

Scientists funded by the National Science Foundation (NSF) and affiliated with the University of Wisconsin-Madison and NOAA's National Climatic Data Center (NCDC) in Asheville, N.C., reported the findings in the journal Geophysical Research Letters. The work should help clarify two studies last year that drew connections between global warming and increasingly intense hurricanes.

"Documenting trends in hurricane intensity is made more difficult by sparse observations and has led to debates about whether the trends are real, or are artifacts of observations," says Jay Fein, program director in NSF's division of atmospheric sciences. "This study has directly addressed this point by using, for the first time, a new satellite data set to look at hurricane trends."

For decades, hurricane researchers found it difficult to work with the inconsistent nature of hurricane data. Before the advent of weather satellites, scientists were forced to rely on scattered ship reports and sailor logs to stay abreast of storm conditions. The advent of weather satellites during the 1960s dramatically improved the situation, but the technology has changed so rapidly that newer satellite records are barely consistent with older ones.

"This new data set is unlike anything that's been done before," says Kossin. "It's going to serve a purpose as being the only globally consistent data set around. The caveat of course, is that it only goes back to 1983."

After NCDC researchers recalibrated the hurricane figures, Kossin took a fresh look at how the new numbers on hurricane strength correlate with warming ocean temperatures, a side effect of global warming. What he found both supported and contradicted previous findings. "The data say that the Atlantic has been trending upwards in hurricane intensity quite a bit," says Kossin. "But the trends appear to be inflated or spurious everywhere else, meaning that we still can't make any global statements."

The Atlantic is also unique in that the physical variables that converge to form hurricanes--including wind speeds, wind directions and temperatures--mysteriously feed off each other to make conditions ripe for a storm. But scientists don't understand why, Kossin adds.

"While we can see a correlation between global warming and hurricane strength, we still need to understand exactly why the Atlantic is reacting to warmer temperatures in this way, and that is much more difficult to do," says Kossin. "We need to be creating models and simulations to understand what is really happening here."

Co-authors of the paper are Daniel Vimont, also at the University of Wisconsin--Madison, Ken Knapp, at NCDC, and Richard Murnane, at the Bermuda Institute of Ocean Sciences.