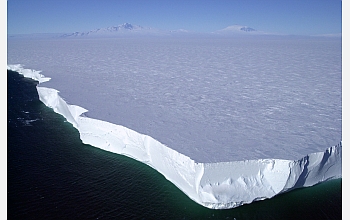 This iceberg is a fragment of a much larger one that broke away from the Ross Ice Shelf.

The United States marked the start of International Polar Year (IPY) on Feb. 26, 2007, with an event hosted by the National Science Foundation (NSF) and the National Academies in Washington, D.C. During the ceremony, a panel of government leaders presented the role their agencies will play in this international effort. Polar scientists discussed the latest research and expeditions to take place during IPY.

"As a nation, we have explored the frontiers of discovery and innovation on and off the ice," said NSF Director Arden L. Bement, Jr., in his opening remarks. Our support of research in the polar regions entails massive logistical challenges, and immense rewards. Today, we are refreshing our commitment to scientific leadership in the polar regions. And we are pledging our continued support of polar research and meeting the challenges that entails."

International Polar Year is a global research effort to better understand the polar regions and their climatic effect on the Earth. More than 200 scientific expeditions will take place over the next 2 years to study changes to permafrost, the melting of polar ice sheets, and marine life in the cold and dark. The research completed during IPY will provide a baseline for understanding future environmental change.

In related polar news, NSF announced the launch of a new South Pole telescope, which can detect cosmic microwave background radiation, the afterglow of the big bang, with minimal interference from water vapor. The agency also announced that on March 19, 2007, four NSF-supported teams will compete in the Society of Automotive Engineers Clean Snowmobile Challenge in Houghton, Mich., to produce a zero-emissions snow vehicle.

"We support investments in research, education, and tools with excitement, commitment, and the anticipation of imparting new knowledge to a worldwide audience," said Bement. "Ultimately, our support of polar research will help engage the world's citizens in a greater understanding of science, and help us find solutions to common global problems."

U.S. federal agencies engaged in research and education will participate actively in IPY. The White House Office of Science and Technology Policy has identified NSF as the lead federal agency for coordinating U.S. IPY activities.

The International Polar "Year" will actually extend from March 1, 2007, until March 1, 2009, to allow researchers to conduct two annual observing cycles in each polar region, particularly in the isolated parts that are prohibitively cold and dark for six months of the year.