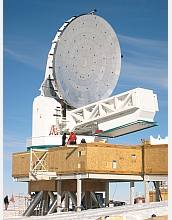 For an animation showing the comparative scale of the South Pole Telescope and video on Betacam SP of the final stages of its construction, contact Dena Headlee, (703) 292-7739, dheadlee@nsf.gov

The National Science Foundation (NSF) is making available to broadcasters an animation that shows the scale of the massive telescope as well as video of the completion of its construction. NSF manages the U.S. Antarctic Program and its three year-round stations, including Amundsen-Scott South Pole.

The $19.2 million South Pole Telescope (SPT) is funded primarily by NSF, with additional support from the Kavli Foundation of Oxnard, Calif., and the Gordon and Betty Moore Foundation of San Francisco. It began operations in mid-February.

The telescope stands 75 feet (22.8 meters) tall, measures 33 feet (10 meters) across and weighs 280 tons (254 metric tons). It was assembled in Kilgore, Texas, then taken apart, shipped across the Pacific Ocean to New Zealand, and flown from there to the South Pole. Since November, work has been underway around the clock to reassemble and deploy the telescope.

"The telescope, camera and optics are all working as designed," said John Carlstrom, the S. Chandrasekhar distinguished service professor in astronomy and astrophysics at the University of Chicago, who heads the SPT team. "SPT's first light is a major milestone for the project and a fitting conclusion to a remarkably productive summer at the South Pole station. We now look forward to fully characterizing the instrument and beginning cosmological observations."

SPT's first views occurred almost exactly 50 years after a team of 18 men spent the first winter in history at the South Pole as part of the 1956-1957 International Geophysical Year (IGY), which was the third polar year. The views occurred just days before nations around the globe launched the International Polar Year 2007-2008, the first such global research campaign since IGY. The U.S. opening ceremony for IPY was held Feb. 26 at the National Academies of Sciences in Washington D.C.

On Feb. 26, a redesigned federal government Web portal (www.ipy.gov) for IPY went online. The more graphics-intense site serves as a central location for the news media and the public to keep track of federally funded IPY research expeditions and learn about educational opportunities and resources, museum exhibits and other federally supported IPY resources. The new site allows users to subscribe to an RSS feed to follow IPY developments. The site also features space for agencies to highlight their IPY work, in addition to individual agency sites.