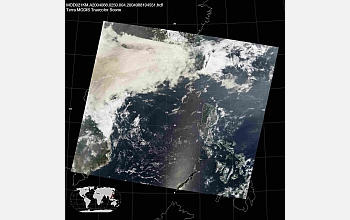 A dust storm from Mongolia makes its way across the Pacific Ocean to California.

More than three-quarters of the particulate pollution known as black carbon and transported at high altitudes over the West Coast during spring comes from Asia, according to a research team led by scientist V. Ramanathan of the Scripps Institution of Oceanography (SIO) in La Jolla, Calif. The material not only affects climate in Asia, it also carries consequences for the Pacific Ocean region that drives much of the climate around the world.

Climate scientists Ramanathan and Odelle Hadley are lead authors of a research paper appearing in the March 14 issue of the Journal of Geophysical Research. The research was funded by the National Science Foundation, the National Oceanic and Atmospheric Administration (NOAA) and the California Energy Commission (CEC).

"This study demonstrates that aerosols from all sources in East Asia significantly affect not only regional climate, but also affect climate across the 8,000 kilometers of the north Pacific Ocean," said Jay Fein, NSF program director for climate dynamics.

Transport of Asian black carbon, which is generated by automobile exhaust, agricultural burning and other sources, is heaviest in spring when cold Arctic fronts dip to lower latitudes and loft warmer air to higher altitudes. Worldwide transport of the aerosols keeps them at high altitudes for up to two weeks.

Composed mostly of soot, the particles dim the ocean surface by blocking sunlight, which then heats the atmosphere. "The soot heating of the atmosphere exceeds the surface dimming, and as a result, the long-range transported soot amplifies the global warming due to increase in CO2," said Ramanathan. "We have to find out if this amplification is just restricted to spring or if it's happening throughout the year."

The measure of high black carbon concentration from Asian sources "is a startling finding by itself, but its potential importance is magnified by the fact that black carbon is believed to have a disproportional impact on regional climate," said Guido Franco, technical lead for climate change research at the CEC.

Black carbon concentrations diminish as they move farther away from their sources in cities and farmlands in countries like China and India. However, over the Pacific Ocean, the particles are concentrated enough to warm the upper atmosphere. The black carbon likely effects a variety of other physical and biological conditions in the areas of the Pacific over which the particulate pollution passes, said Ramanathan

The researchers compared rarely available in-flight data collected during the spring 2004 Cloud Indirect Effects Experiment project, a component of which was a series of atmospheric meteorological measurements made during flights originating in Eureka, Calif. The team combined that information with data from 30 West Coast meteorological stations and compared it with computer predictions made by the Chemical Weather Forecast System.