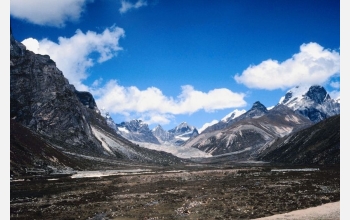 Climate change is affecting ecosystems from the tropics to high mountains like the Himalayas.

A new climate modeling study forecasts the complete disappearance of several existing climates in tropical highlands and regions near the poles, while large swaths of the tropics and subtropics may develop new climates unlike any seen today.

In general, the models show that existing climate zones will shift toward higher latitudes and higher elevations, squeezing out the climates at the extremes--tropical mountaintops and the poles--and leaving room for unfamiliar climes and new ecological niches around the equator.

The most severely affected parts of the world span both heavily populated regions, including the southeastern United States, southeastern Asia, and parts of Africa, and known hotspots of biodiversity, such as the Amazonian rainforest and African and South American mountain ranges.

The patterns of change foreshadow significant impacts on ecosystems and conservation. "There is a close correspondence between disappearing climates and areas of biodiversity," says University of Wisconsin at Madison geographer Jack Williams, primary author of the paper, which could increase risk of extinction in the affected areas.

For example, the Andes, Central America, South Africa and the Indonesian Archipelago are all hotspots of biological diversity. The projected disappearance of the climates unique to these regions places some species at risk of extinction.

Williams and his colleagues foresee the appearance of novel climate zones on up to 39 percent of the world's land surface area by 2100, if current rates of carbon dioxide and other greenhouse gas emissions continue, and the global disappearance of up to 48 percent of current land climates.

In an effort to keep up with climate change, plant and animal species already have begun to move away from the equator and toward the colder climates of the poles. In mountain ecosystems, many lower-mountain species are moving higher--to cooler spots. What will happen when they "run out of room" on a mountainside?

The question becomes not just whether a given climate will still exist, but "will a species be able to keep up with its climatic zone?" Williams says.