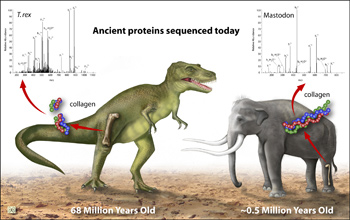 Ancient proteins have been found in bones like those of a 68-million-year-old T. rex fossil.

Scientists have confirmed the existence of protein in soft tissue recovered from the fossil bones of a 68 million-year-old Tyrannosaurus rex (T. rex) and a half-million-year-old mastodon.

Their results may change the way people think about fossil preservation and present a new method for studying diseases in which identification of proteins is important, such as cancer.

When an animal dies, protein immediately begins to degrade and, in the case of fossils, is slowly replaced by mineral. This substitution process was thought to be complete by 1 million years. Researchers at North Carolina State University (NCSU) and Harvard Medical School now know otherwise.

The researchers' findings appear as companion papers in this week's issue of the journal Science.

"Not only was protein detectably present in these fossils, the preserved material was in good enough condition that it could be identified," said Paul Filmer, program director in the National Science Foundation (NSF) Division of Earth Sciences, which funded the research. "We now know much more about what conditions proteins can survive in. It turns out that some proteins can survive for very long time periods, far longer than anyone predicted."

Mary Schweitzer of NCSU and the North Carolina Museum of Natural Sciences discovered soft tissue in the leg bone of a T. rex and other fossils recovered from the Hell Creek sediment formation in Montana.

After her chemical and molecular analyses of the tissue indicated that original protein fragments might be preserved, she turned to colleagues John Asara and Lewis Cantley of Harvard Medical School, to see if they could confirm her suspicions by finding the amino acid used to make collagen, a fibrous protein found in bone.

Bone is a composite material, consisting of both protein and mineral. In modern bones, when minerals are removed, a collagen matrix--fibrous, resilient material that gives the bones structure and flexibility--is left behind. When Schweitzer demineralized the T. rex bone, she was surprised to find such a matrix, because current theories of fossilization held that no original organic material could survive that long.

"This information will help us learn more about evolutionary relationships, about how preservation happens, and about how molecules degrade over time, which could have important applications in medicine," Schweitzer said.

To see if the material had characteristics indicating the presence of collagen, which is plentiful, durable and has been recovered from other fossil materials, the scientists examined the resulting soft tissue with electron microscopy and atomic force microscopy. They then tested it against various antibodies that are known to react with collagen. Identifying collagen would indicate that it is original to T. rex--that the tissue contains remnants of the molecules produced by the dinosaur.

"This is the breakthrough that says it's possible to get sequences beyond 1 million years," said Cantley. "At 68 million years, it's still possible."

Asara and Cantley successfully sequenced portions of the dinosaur and mastodon proteins, identifying the amino acids and confirming that the material was collagen. When they compared the collagen sequences to a database that contains existing sequences from modern species, they found that the T. rex sequence had similarities to those of chickens, and that the mastodon was more closely related to mammals, including the African elephant.

The protein fragments in the T. rex fossil appear to most closely match amino acid sequences found in collagen of present-day chickens, lending support to the idea that birds and dinosaurs are evolutionarily related.

"Most people believe that birds evolved from dinosaurs, but that's based on the 'architecture' of the bones," Asara said. "This finding allows us the ability to say that they really are related because their sequences are related."

"Scientists had long assumed that the material in fossil bones would not be preserved after millions of years of burial," said Enriqueta Barrera, program director in NSF's Division of Earth Sciences. "This discovery has implications for the study of similarly well-preserved fossil material."

The research was also funded by grants from the David and Lucille Packard Foundation, the Paul F. Glenn Foundation and Beth Israel Deaconess Medical Center.