National Science Board honors Falacci and Heuton, who hatched the math-based, crime-solving drama 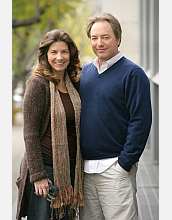 The popular television drama series "Numb3rs," about an FBI agent whose brother, a genius mathematician, helps solve crimes in the Los Angeles area by using mathematical problem-solving techniques, will receive a National Science Board group Public Service Award for 2007, along with the program's co-creators, Nick Falacci and Cheryl Heuton.

The CBS Paramount-produced drama and its two collaborators will be honored for their contributions toward increasing scientific and mathematical literacy on a broad scale at a ceremony May 14 at the State Department in Washington, D.C.

"Numb3rs" is the first television series on which Falacci and Heuton have collaborated. Wisely bringing in several mathematicians as consultants, the producers were able to provide realism to the mathematical theories employed in the crime-solving cases of each episode. Experts say that the various theories and mathematical problems and equations used on the program are easily transferable to equivalent real-world situations. Cryptanalysis, probability theory, game theory, decision theory, principal components analysis, multivariate time series analysis and astrophysics are just some of the many disciplines employed in the series thus far. Working mathematicians of the Mathematical Association of America have recognized the accuracy and validity of the theories and their presentations on the program.

"Nick and I felt that a mathematician could be an exciting TV character because many mathematicians are natural detectives and inventive problem-solvers," Heuton said. "Because of their creativity and rigorous training in logic, they often have a unique way of looking at the world. CBS was quick to understand that the amazing things being done with math today could be the basis of a new kind of crime show. We designed it around a family to give it a strong emotional basis, and to show the audience the human side of both the mathematician and his FBI agent brother. The math gave people something new to think about, even though it's already a constant and vital part of their lives. We hope the show brings home that reality, and encourages more people to be excited about math and science."

"Numb3rs" is in its third season, and not only does it have a loyal audience, but the show has spawned a large fan base on the Internet with blogs and fan sites. The show has also led to the creation of other educational programs that explore topics employing scientific theory or processes.

"Numb3rs" is currently the most-watched program on Friday nights, attracting nearly 12 million viewers. Rob Morrow, who plays FBI agent Don Eppes, is a devoted family man often consumed by his crime-solving passion. David Krumholtz plays Morrow's brother, Charlie Eppes. Charlie finds the solutions to many complex cases through his mathematical genius, yet often finds himself in philosophical conflict with his brother. Charlie is kept in check, partly by his protective father, Alan Eppes (Judd Hirsch). Best friend and colleague Larry Fleinhardt (Peter MacNicol), a physicist, along with sometimes girlfriend and former student Amita Ramanujan (Navi Rawat), keep Charlie in focus with his work. Fans on the Internet have followed closely the characters' developing relationships over time.

The "Numb3rs" series has spawned many learning opportunities for students. Mathematics teachers are employing the lessons of "Numb3rs" in their classrooms. Also, Web-based programs have appeared. One of them, developed by Texas Instruments, in conjunction with the National Council of Teachers of Mathematics, provides a wide range of activities in "We All Use Math Every Day" (http://www.weallusematheveryday.com/tools/waumed/home.htm). The Texas Instruments program engages students with many of the concepts seen on "Numb3rs" to show how mathematics may be applied to their world.

As for Falacci and Heuton, creators of "Numb3rs," both are now accomplished screenwriters, although they came from somewhat different backgrounds prior to pooling their talents for the series. Heuton studied literature at the University of California, San Diego, and for a time wrote for newspapers in Southern California. Falacci, a native of Massachusetts, attended the Tisch School of the Arts at New York University, where he developed his screenwriting skills. Teaming up with Heuton, the two collaborators found more in common than writing, and eventually married.

This year the National Science Board will recognize University of Wisconsin chemistry professor and educator, Bassam Z. Shakhashiri, with a 2007 individual Public Service Award.

The annual Public Service Award recognizes individuals and organizations for their extraordinary contributions to increase public understanding of science. Recipients are chosen for their contributions to public service in areas such as: increasing the public's understanding of the scientific process and its communication; contributing to the development of broad science and engineering policy; promoting the engagement of scientists and engineers in public outreach; and fostering awareness of science and technology among broad segments of the population.

The National Science Board initiated the Public Service Award in 1996. The first honorees were named in 1998. The board is an independent 24-member body of policy advisors to the President and Congress on matters of science and engineering research and education, and is the oversight body for the National Science Foundation, an independent federal agency that supports almost all areas of fundamental research nationwide.