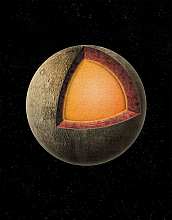 An artist's rendition of the interior structure of Mercury.

By tracking a subtle wobbling of the planet Mercury as it spins about its axis, researchers using a trio of ground-based telescopes have found strong evidence that the planet has a molten core.

In their paper, the researchers show that careful measurements of Mercury's spin--to an accuracy of one in 100,000--reveal that the planet's interior is decoupled from its exterior, providing strong evidence of a molten core.

Astronomer Jean-Luc Margot of Cornell University, Stan Peale of the University of California, Santa Barbara, Ray Jurgens and Martin Slade of the Jet Propulsion Laboratory (JPL) in Pasadena, Calif., and Igor Holin of the Space Research Institute in Russia report their findings in the cover story of the May 4, 2007, journal Science.

While most models for the formation of Mercury suggest the planet has an iron-rich core, many predict that the core is solid after billions of years of cooling. Others predict that small amounts of sulfur and other trace elements mixed with the iron have lowered the core's freezing point, keeping the planet's outer core from completely solidifying over that time.

While peering into the deepest interior of a planet--even our own--is difficult even with on-site technology, the ground-based telescope data collected by Margot and his colleagues provided evidence that strongly supports the latter scenario, suggesting the core is at least partially molten and may contain at least small amounts of sulfur.

To obtain their measurements, the astronomers compared the properties of the return signal as it struck the distributed telescope locations on Earth's surface. The amplitude of the wobbling was twice what the researchers expected for a solid planet, but on par with an object that has a solid exterior and liquid core.

The National Radio Astronomy Observatory is an NSF facility, operated under cooperative agreement by Associated Universities, Inc. The Arecibo Observatory is part of the National Astronomy and Ionosphere Center, which is operated by Cornell University under a cooperative agreement with the NSF. Part of this work was supported by JPL, operated by Caltech under contract with NASA.

Additional information will be available in the following press releases: