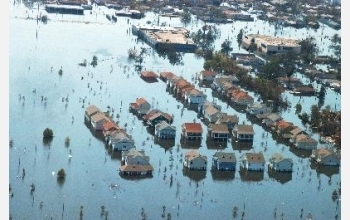 Sediment from floodwaters of Hurricanes Katrina and Rita contain high levels of contamination.

In the first study to evaluate urban sediments after a natural disaster, scientists have found that floodwaters in New Orleans from Hurricanes Katrina and Rita in August and September 2005, contained high levels of fecal indicator bacteria and microbial pathogens.

The scientists collected water and sediment samples from the interior canal and shoreline of New Orleans and the offshore waters of Lake Pontchartrain, which showed higher-than-normal levels of bacteria and pathogens. Levels of the microbes fell within a few weeks after flooding had completely subsided.

"Our findings emphasize the importance of including environmental monitoring in disaster management plans," said Helena Solo-Gabriele, an environmental engineer at the University of Miami and co-author of the study. "A rapid assessment of conditions can protect emergency workers and residents from potential illnesses that could result from exposure."

The scientists--funded by the National Science Foundation (NSF) and affiliated with the University of Miami's Rosenstiel School of Marine & Atmospheric Science (RSMAS) and other institutions--report their results in this week's issue of the Proceedings of the National Academy of Sciences. The paper, co-authored by 19 scientists and titled, "Impacts of Hurricanes Katrina and Rita on the Microbial Landscape of the New Orleans Area," provides insights into public health and human exposure to both inhaled and ingested pathogens from sewage-contaminated floodwaters induced by hurricanes.

"We know that hurricanes bring infectious disease, chemical contamination and death in their wake," said Don Rice, director of NSF's chemical oceanography program, which funded the research. "Now we are making a concerted effort to study and understand the connections."

During the hurricanes, a high volume of water flowed into cities in their paths. Residents were exposed to flood waters for a long period, say the researchers. The most contaminated area tested, near the New Orleans Superdome, contained high levels of sewage pathogens.

Scientists from RSMAS' Center for Oceans and Human Health, funded by NSF and the National Institutes of Health, along with researchers at five other universities analyzed water and sediment samples collected as the floodwaters receded from New Orleans during the 2 months after the 2005 hurricanes.

The researchers point out that monitoring efforts should focus on evaluating the impacts of sediments within an area affected by hurricane floodwaters, as exposure to contaminated sediments, by inhaling or ingesting, could result in health risks. Efforts should include monitoring pathogens in addition to indicator microbes--those that aren't themselves harmful but are known to exist alongside pathogens.

Improvements should focus, the scientists say, on reducing sewage contamination from groundwater seepage and storm water drainage in the region.