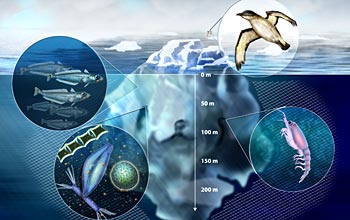 Icebergs hold trapped terrestrial material, which they release far out at sea as they melt.

Icebergs have long gripped the popular imagination, whether as relatively run-of-the-mill floating hazards that cause "unsinkable' ships to founder or, more recently, as enormous breakaway pieces of ice the size of states or small countries.

But, according to a paper published in this week's Science magazine, scientists have discovered that these floating ice islands--some as large as a dozen miles across--have a major impact on the ecology of the ocean around them, serving as "hotspots" for ocean life, with thriving communities of seabirds above and a web of phytoplankton, krill and fish below.

The icebergs hold trapped terrestrial material, which they release far out at sea as they melt. Scientists have discovered that this process produces a "halo effect" with significantly increased nutrients, chlorophyll and krill out to a radius of more than 3 kilometers (2 miles).

Based on their new understanding of the role of icebergs in the ecosystem and the sheer number of icebergs in the Southern Ocean--the researchers counted more than 11,000 in satellite images of some 4,300 square miles of ocean--the scientists estimate that, overall, the icebergs are raising the biological productivity of nearly 40 percent of Antarctica's Weddell Sea.

Scientists also have begun to suspect, but argue for additional study, that icebergs may also play a surprising role in global climate regulation by removing carbon from the atmosphere.

The National Science Foundation (NSF) funded research was conducted by scientists from the Monterey Bay Aquarium Research Institute, the San Diego Supercomputer Center, Scripps Institution of Oceanography, the University of San Diego and the University of South Carolina.

As manager of the U.S. Antarctic Program, NSF coordinates and provides logistical support to all U.S. research conducted on the southernmost continent. The White House Office of Science and Technology Policy has designated NSF as the lead agency for the International Polar Year, a global scientific deployment to the Polar Regions that began in March 2007.

NSF officials agreed that the new research may open a new and productive field for ecosystem research at the dawn of the Polar Year.

"This research establishes yet another promising horizon for polar ecology," said Roberta Marinelli, organisms and ecosystems program director for the U.S. Antarctic Program. "And as we progress through the International Polar Year, NSF hopes to expand this work to learn yet more about these unique ecological niches and their significance to oceanic processes."