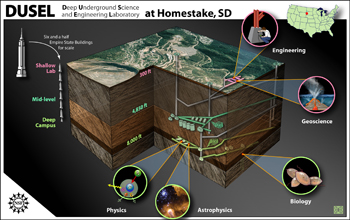 An artist's rendition of the proposed Deep Underground Science and Engineering Laboratory design.

The National Science Foundation (NSF) today announced selection of a University of California-Berkeley proposal to produce a technical design for a Deep Underground Science and Engineering Laboratory (DUSEL) at the former Homestake gold mine near Lead, S.D. The Homestake team, headed by Kevin Lesko, could receive up to $5 million per year for up to three years.

A 22-member panel of external experts, all screened for conflicts of interest, exhaustively merit-reviewed proposals from four teams and unanimously determined that the Homestake proposal offered the greatest potential for developing a DUSEL, and NSF concurred with the panel's recommendation. The agency's selection of the Homestake proposal provides funding only for design work. Any decision to construct and operate a DUSEL would entail a sequence of approvals by NSF and the National Science Board; funding would then have to be requested by the Administration and approved by Congress.

"We are excited about the opportunities in underground research and education that a DUSEL would provide and look forward to working with all of the research communities to develop a well-conceived plan for this unique, world-leading facility at the Homestake Mine," said Tony Chan, assistant director for the NSF Directorate of Mathematical and Physical Sciences. "In tandem with the design of the facility infrastructure, NSF also will begin working with researchers to identify the initial suite of experiments that might be deployed in DUSEL."

Over the past decade, a dozen "blue-ribbon" independent reports from the National Academies and multiagency government committees have emphasized the need for a DUSEL, and various candidate sites have been discussed. In September 2006, NSF solicited proposals to produce technical designs for a DUSEL at one specific site. By the January 2007 deadline, four teams, each focusing on a different location, had submitted proposals.

The review panel included outside experts from relevant science and engineering communities and from supporting fields such as human and environmental safety, underground construction and operations, large project management, and education and outreach. Scientists from Japan, Italy, the United Kingdom and Canada also served on the panel. The review process included site visits by panelists to all four locations, and two meetings to review the information, debate and vote on which--if any--of the proposals would be recommended for funding.

The concept of DUSEL grew out of the need for an interdisciplinary "deep science" laboratory that would allow researchers to probe some of the most compelling questions in modern science. Among them: What are the invisible dark matter and dark energy that comprise more than 95 percent of everything visible in the universe? What is the nature of ghostly particles called neutrinos that pervade the cosmos, but almost never interact with matter, and what can certain kinds of extremely rare radioactivity and particle decay reveal about the fundamental behavior of atoms? Will this site help reliably predict and control earthquakes? What are the characteristics of microorganisms at great depth?

Those and other crucial questions can only be investigated at great depth, where thousands of feet of rock can shield ultra-sensitive physics experiments from background activity, and where geoscientists, biologists and engineers can have direct access to geological structures, tectonic processes and life forms that cannot be studied fully in any other way. Several countries, including Canada, Italy and Japan, have extensive deep science programs. The United States has no existing facilities below a depth of 1 kilometer.

If eventually built as envisioned by its supporters, a Homestake DUSEL would be the largest and deepest facility of its kind in the world.