Climate change is suspected cause 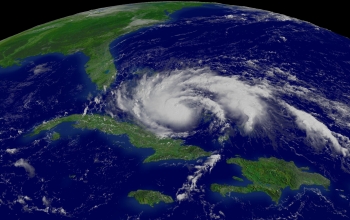 Atlantic Ocean hurricanes like Rita are increasing in frequency, according to new research results.

About twice as many hurricanes form each year on average in the Atlantic Ocean compared to a century ago, states a new statistical study of hurricanes and tropical storms in the north Atlantic. The study concludes that warmer sea surface temperatures (SSTs) and altered wind patterns associated with global climate change are fueling much of the increase.

The study, by Greg Holland of the National Center for Atmospheric Research (NCAR) in Boulder, Colo., and Peter Webster of Georgia Institute of Technology, is published online in the journal Philosophical Transactions of the Royal Society of London.

"These numbers are a strong indication that climate change is a major factor in the increasing number of Atlantic hurricanes," says Holland.

"This study adds to the evidence of another ramification of climate change," says Cliff Jacobs of the National Science Foundation (NSF)'s atmospheric sciences division, which funded the research. "Now we need to better understand the complex physics and dynamics of the full life-cycle of these hurricanes."

The study identified three periods since 1900, separated by sharp transitions, during which the average number of hurricanes and tropical storms increased dramatically and then remained elevated and relatively steady. The first period, between 1900 and 1930, saw an average of six Atlantic tropical cyclones (or major storms), of which four were hurricanes and two were tropical storms.

This latter period has not yet stabilized, which means that the average hurricane season may be more active in the future. Holland and Webster caution, however, that it is not possible at this time to predict the level at which the frequency and intensity of storms will stabilize.

The increases over the last century correlate closely with SSTs, which have risen by about 1.3 degrees Fahrenheit. The changes in SSTs took place in the years prior to the sharp increases in storm frequency, with an SST rise of approximately 0.7 degrees Fahrenheit leading up to 1930 and a similar rise leading up to 1995 and continuing even after. The authors note that other studies indicate that most of the rise in Atlantic SSTs can be attributed to global warming.

The unusually active hurricane seasons of 2004 and 2005 have spurred considerable research into the question of whether more intense tropical cyclones are correlated with natural cycles, global warming, or some other cause.

The new study indicates that natural cycles are probably not the entire cause because the increase has happened across the last century rather than oscillating in tandem with a natural cycle.

The study also finds that enhanced observations in recent decades cannot account for all of the increase. To observe storms in the Atlantic more systematically, meteorologists began relying on data on aircraft flights in 1944 and satellites about 1970. The distinct transitions in hurricane activity noted by Holland and Webster occurred around both 1930 and 1995.

"We are of the strong and considered opinion that data errors alone cannot explain the sharp, high-amplitude transitions between the climatic regimes, each with an increase of around 50 percent in cyclone and hurricane numbers, and their close relationship with SSTs," the authors state.

While the number of storms has steadily increased, the proportion of hurricanes to all Atlantic tropical cyclones has remained steady.

Hurricanes have generally accounted for roughly 55 percent of all tropical cyclones. However, the proportion of major hurricanes (those with maximum sustained winds of at least 110 miles per hour) to less intense hurricanes and tropical storms has oscillated irregularly, and has increased significantly in recent years.

The 2006 hurricane season was far less active than the two preceding years, in part because of the emergence of an El Nino event in the Pacific Ocean. However, that year, which was not included in the study, would have ranked above average a century ago, with five hurricanes and four other named storms.

"Even a quiet year by today's standards would be considered normal or slightly active compared to an average year in the early part of the 20th century," Holland says.