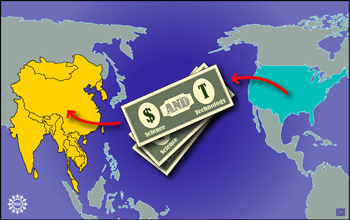 Heavy investments in science and technology during the 1990s by some Asian nations are paying notable economic dividends in high-tech areas important to the United States, according to a recently released report by the National Science Foundation (NSF).

Since the mid-1990, Asia's national investment in research and development (R&D) as a share of the total value of goods and services produced grew faster than in the United States or the European Union, according to NSF's Division of Science Resources Statistics (SRS), titled Asia's Rising Science and Technology Strength.

Asia's R&D activity may have surpassed the European Union in 2002, and by 2003, was nearly 10 percent greater. According to these data, in 2003, Asia's R&D investment may have been as much as 80 percent that of the United States, largely reflecting Chinese growth. While precise comparisons are technically problematical, there is little doubt about China's rapid advancement into the group of leading R&D nations.

"There are a number of reasons the findings are important to the United States," said Lawrence Rausch, SRS senior analyst and project director. "Improved science and technological capacity in Asian countries create new market opportunities for U.S. business. In addition, it can lead to new opportunities for U.S. researchers and businesses to collaborate overseas."

China's 20 percent, annual, R&D growth rate from 1995 to 2003 outgrew all other Asian nations, noteworthy because of China's emergence on the world stage as an economic power. This was more than Singapore's 15 percent growth rate and Taiwan's and South Korea's 10 and 7 percent average growth rates respectively.

One reason for China's significant R&D growth rate may be its government's declaration of education, science and technology as strategic engines of sustainable economic development. China already is an important player in high-technology markets, attracting investments from the world's major corporations.

"Asia's share of the global, high-tech product and service markets is growing in equal measure along with its investment in R&D," said Rausch. "It will also lead to increased competition for U.S. products and services in the global marketplace."

Asia's interest in science and technology has not escaped the attention of the U.S. business sector. Estimates show U.S.-based multinational corporations nearly doubled investment in overseas research and development activities since the mid-1990s, up from $11.9 billion in 1994, to $21.2 billion in 2002. U.S.-owned companies located in Asia performed $3.6 billion of that in 2002, down from $3.9 billion in 2001, but more than twice the $1.5 billion performed in 1994.

The ability of Asian nations to innovate and add value to scientific knowledge is supported by an outflow of scientific articles, new inventions, and perhaps most indicative, its production of newly degreed scientists and engineers. Asia produced 24,900 doctorates in science and engineering in 2001, almost as many as the 26,000-27,000 the United States produced from 2001-2003.

Although only very broad estimates of bachelor's degrees conferred in Asia are possible because of data gaps, there are big differences in number of degrees awarded between Asia and their western counterparts. Countries like China are increasingly focusing on the quality of these degrees. Engineering bachelor's degree output in Asia nearly doubled that in the United States and the European Union combined in 1990. Meanwhile, U.S. engineering degrees declined 6 percent during the same time period.

In 2002, the United States and the European Union conferred 258,900 engineering degrees combined; Asia conferred 590,800 and is pulling farther ahead.

"There is a great deal of press chronicling the success of China, India and several Asian economies in the global marketplace," said Rausch, "but what is less well known is that many of these same Asian countries are also investing heavily in science and engineering and will likely become even stronger players in the world's science and technology marketplace in the not-too-distant future."