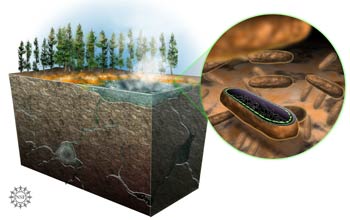 A unique chlorophyll-producing bacterium has been discovered in the hot springs of Yellowstone.

In the hot springs of Yellowstone National Park, a team of researchers partially funded by the National Science Foundation (NSF) discovered a new bacterium that transforms light into chemical energy. The discovery of the chlorophyll-producing bacterium, Candidatus chloracidobacterium (Cab.) thermophilum, is described in the July 27, 2007, issue of Science in a paper led by Don Bryant of Penn State University and David M. Ward of Montana State University.

Yellowstone National Park is a tourist's wonderland because of its wildlife, mountains, geysers and hot springs. But the park is also a scientific reservoir that harbors what may be the world's largest diversity of thermophilic (heat-loving) microorganisms.

Discovered in microbial mats in three of Yellowstone's hot springs, Cab. thermophilum belongs to a new genus and species. It also belongs to the Acidobacteria phylum, a poorly characterized phylum that was not previously known to include bacteria capable of photosynthesis.

Chlorophyll-producing bacteria are so abundant that they perform half the photosynthesis on Earth. But only five of the 25 major groups, or phyla, of bacteria previously were known to contain members with this ability.

"The microbial mats give the hot springs in Yellowstone their remarkable yellow, orange, red, brown and green colors," says Bryant. Microbiologists are intrigued by Yellowstone's hot springs "because their unusual habitats house a diversity of microorganisms, but many are difficult or impossible to grow in the lab. Metagenomics has given us a powerful new tool for finding these hidden organisms and exploring their physiology, metabolism, and ecology."

Metagenomics is a means of studying organisms without having to culture them. Bulk samples are collected from the environment, then DNA is isolated from the cells and sequenced by so-called shotgun sequencing on a very large scale. Analysis of the DNA sequences reveals what types of genes and organisms are present in the environment.

Cab. thermophilum grows near the surface of the mats together with cyanobacteria, or blue-green algae, where there is light and oxygen, at a temperature of about 50 to 66 degrees Celsius (122 to 151 degrees Fahrenheit).

Unexpectedly, the new bacterium was discovered to have special light-harvesting antennae known as chlorosomes, which each contain about 250,000 chlorophylls. No member of this phylum nor any aerobic microbe was known to make chlorosomes before this discovery.

"This is an excellent example of how metagenic information reveals how little we know about life on Earth," said Weiner.

Members of the phylum Acidobacteria have proven very hard to grow in laboratory cultures, which means their ecology and physiology are very poorly understood. Most species of Acidobacteria have been found in poor or polluted soils that are acidic, with a pH below three. However, the Yellowstone Cab. thermophilum lived in more alkaline environments that are about pH 8.5 (on a 1-14 scale).

"Finding a previously unknown, chlorophyll-producing microbe is the discovery of a lifetime for someone who has studied bacterial photosynthesis for as long as I have (35 years)," says Bryant. "I wouldn't have been as excited if I had reached into that mat and pulled out a gold nugget the size of my fist!"

Yellowstone habitats have been explored since the 1960s for new organisms that may have important applications for biotechnology, pollution clean-ups (bioremediation), and medicine. Bryant and Ward's team found the new bacterium in three hot springs--Mushroom Spring, Octopus Spring, and Green Finger Pool--not far from the Old Faithful Geyser. Also living in these same hot springs is the famous Yellowstone microbe, Thermus aquaticus, which revolutionized forensics and other fields by making the polymerase chain reaction (PCR) a routine procedure.

Funding sources for Bryant and Ward's research besides NSF included the Department of Energy, the NASA Exobiology Program, and the Thermal Biology Institute of Montana State University.