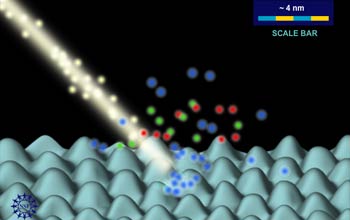 
Pancreatic cancer affects intestinal tissue. There are changes at the nano-level, not the cellular.

Recent interest regarding the dangers of pancreatic and colon cancer prompted us to highlight this press release that was originally published in 2007. The research is ongoing and research results announcing new developments, including clinical trials, are in the press. One recent publication in the Proceedings of the National Academy of Sciences (and linked directly from Vadim Backman's homepage), outlines a new advancement with the technique that in some cases appears to identify cancer when existing approaches have not. For more details on those latest research efforts, see Light Shines for Potential Early Cancer Diagnosis Technique at the Northwestern University Web site.

The new detection techniques, developed with support from the National Science Foundation (NSF), produce an optic fingerprint from the altered tissue and then enhance the data for a clearer diagnosis.

The researchers scanned tissue samples from 19 people already diagnosed with pancreatic cancer and 32 without the disease. They properly distinguished patients with cancer at an accuracy approaching 100 percent. The clearest results came from patients in the earliest stages of the disease.

Pancreatic cancer is so deadly, in part, because early detection is so difficult. The pancreas can become dangerously inflamed if examined directly, so routine inspections for at-risk patients are usually not an option.

The results build upon prior studies with colon cancer and support the "field effect" hypothesis that suggests initial cancer stages, even pre-cancerous lesions, can cause minute, potentially detectable changes throughout an entire organ. If similar results are found in other organs, the effect could have broad impact in the timely treatment of breast cancer, lung cancer and others.

The team of engineers from Northwestern University in Evanston, Ill., and physicians from Evanston-Northwestern Healthcare (ENH), reported the findings in the Aug. 1, 2007, Clinical Cancer Research.

"This novel technology uses light to probe tissue architecture at submicron scale. We are excited about this technology because it enables sensing subtle changes in tissue that otherwise are undetectable by conventional microscopic examination," said Northwestern engineer Vadim Backman, an NSF CAREER awardee who led the development of the new technologies and is a co-author on the research.

By studying tissue extracted from an area adjacent to the pancreas, the researchers were able to screen all 51 patients with little risk of inflammation or other complications.

While clinical use is perhaps three to five years in the future, and ongoing studies are needed to confirm the results, the researchers hope the tests can eventually be done without the biopsy.

"We were so encouraged by the successes with colon cancer that we decided to drive the research in a new direction. With colon cancer, you have time, even years, to treat it successfully. Unfortunately, for pancreatic cancer it's not only critical to detect it early, or even before it becomes cancerous, but in many cases it is really the only hope," said Leon Esterowitz, the NSF program officer who has been supporting this research.

Because the study uses tissue samples taken from each patient's duodenum, the uppermost section of the small intestine which can be accessed during endoscopies, doctors could potentially generate earlier diagnoses by examining low-risk patients as part of routine examinations.

The next stages of the pancreatic cancer research trials incorporate some examinations that are biopsy-free and use a shoebox-sized fiber-optic version of the new system, a device now being tested during colonoscopies.

"Besides improving on the technology, we need to determine whether other medical conditions including other cancer types or diseases of the pancreas such as chronic pancreatitis or acute pancreatitis can be distinguished with our technology from pancreatic cancer. It is also important for us to validate our prediction rule on a larger number of pancreatic cancer cases as well as different control groups." said co-author Randall Brand, a gastroenterologist from ENH and an expert on pancreatic cancer.

In trials that began before the pancreas research, the researchers saw encouraging results with colon cancer detection in a study of 500 patients. The new approach also predicted, with 100 percent accuracy, polyps in patients diagnosed with a simultaneous colonoscopy.

Because the experimental procedure only scans the outer few centimeters of the colon and does not require the uncomfortable cleansing process required for a colonoscopy, the researchers believe the approach will encourage more people to get screened before they develop symptoms of disease.

The portable system was not used in the pancreatic cancer studies because the probe needs to be modified for the different scope used in endoscopy, but the underlying technology behind all of the examinations is the same. Each patient was scanned using a combination of elastic light-scattering and low-coherence enhanced backscattering techniques developed by Backman and his colleagues over the last five years. The researchers developed the four-dimensional elastic light scattering fingerprinting (4D-ELF) and low-coherence enhanced backscattering spectroscopy (LEBS) systems with the support of seven NSF grants, including a CAREER award.

Whether in a laboratory or in the portable, fiber-optic system, a xenon lamp shines intense, white light through a series of lenses and filters onto the specimen. The light refracts through the outermost layer of tissues and scatters into a spectrograph, a device that separates a beam of white light into its component wavelengths and measures them. An image sensor captures the result for analysis by a computer.

The technological breakthrough is the ability to cause light to penetrate the cells most affected by cancer without hitting deeper unaffected cells and to scan cell structures on the scale of nanometers, smaller than a doctor can see with a microscope.

"Contemporary diagnostic medicine frequently relies on invasive procedures, such as endoscopy, to detect disease. In the fictional world of Star Trek, a doctor is able to make a diagnosis without ever interrogating an organ. Biophotonics shows that this approach may be closer to reality that one might expect," added Backman.

The nanoscale approach allows the researchers to differentiate cancerous or pre-cancerous tissue from normal tissue, even if the specimens look identical under a normal biopsy.

In both studies, the techniques worked regardless of age, tumor size, smoking history or tumor location, although the researchers hope to use the next trial phase to test individuals with serious pancreatic diseases that are not cancer to see if the changes are truly unique to cancer. Eventually, the researchers hope to expand their study to breast cancer, lung cancer and other variations of the disease.

While the new techniques must undergo further study before its effectiveness can be confirmed, the researchers have partnered with American BioOptics to fully develop the technology. In July, American BioOptics received an NSF Small Business Innovation Research grant to further develop the technology for colon cancer screening and ready the system for commercialization.

In addition to NSF support, the pancreatic cancer study was also supported by the National Institutes of Health.

A b-roll package is available, including interviews, lab footage and animations. A call-in program for reporters was held from NSF at 2:00 p.m. ET on Aug. 1, 2007.