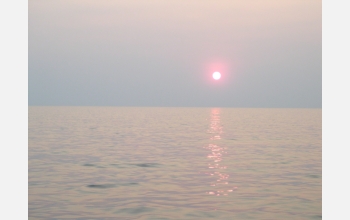 Studying sunspots may lead to better prediction of disease in East Africa.

A new study shows that sunspot cycles can be used to predict heavy rains, flooding and subsequent disease outbreaks in East Africa.

The research, conducted by paleoclimatologist Curt Stager of Paul Smith's College in Paul Smiths, N.Y. and colleagues, can be used by public health officials to increase measures against insect-borne diseases long before epidemics begin. The results are published online in the August 7 issue of the Journal of Geophysical Research.

The scientists showed that unusually heavy rainfalls in East Africa over the past century preceded peak sunspot activity by about one year.

"The hope is that people on the ground will use this research to predict heavy rainfall events," Stager said. "Those events lead to erosion, flooding and disease. With the help of these findings, we can now say when especially rainy seasons are likely to occur, several years in advance."

"These results are an important step in applying paleoclimate analyses to predicting future environmental conditions and their impacts on society," said Dave Verardo, director of the National Science Foundation's paleoclimate program, which funded the research. "It's especially important in a region [East Africa] perennially on the knife-edge of sustainability."

Sunspots indicate an increase in the sun's energy output, and peak on an 11-year cycle. The next peak is expected in 2011-12. If the pattern holds, rainfall would peak the year before.

Because mosquitoes and other disease-carrying insects thrive in wet conditions, heavy rains may herald outbreaks of diseases such as Rift Valley Fever.

The research relied on rainfall data going back a century. Historical records of water levels at lakes Victoria, Tanganyika, and Naivasha also demonstrated the link.

Stager demonstrated that while the link between sunspots and rainfall seemed to grow weaker from 1927 to 1968, the cyclic pattern held true throughout the 20th Century. Previous statistical analysis discounted the link for a variety of reasons, including the influence of climatic disturbances not associated with sunspots.

The researchers, who represent five institutions from the United States and Great Britain, offered several reasons why sunspot peaks may affect rainfall. The increased solar energy associated with sunspots, they suggest, heats both land and sea, forcing moist air to rise and triggering precipitation. It may also induce El Niño events, which increase rainfall in East Africa.

While sunspot peaks augur extraordinarily wet rainy seasons, heavy rains are possible at other times as well, Stager acknowledged. But most of the rainiest times, he said, are consistently coupled with the predictable rhythms of sunspot peaks.

"When you think of climate troubles in Africa, it's usually about drought," Stager said. "You don't often think of the opposite situation.

"Too much rain can create just as many problems."