Study improves our understanding of evolution by identifying steps in the evolution of a protein over the last 450 million years. 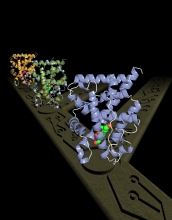 Structural evolution of an important protein in humans and other vertebrates.

Scientists have, for the first time, identified the atomic structure of an ancient protein and revealed in unprecedented detail how it evolved into an important protein in humans and other vertebrates. In doing so, the scientists also addressed some long-standing controversies in evolutionary genetics.

"Never before have we seen so clearly, so far back in time," said Joe Thornton of the University of Oregon. "We were able to see the precise mechanisms by which evolution molded a tiny molecular machine at the atomic level, and to reconstruct the order of events by which history unfolded."

A detailed understanding of the evolution of proteins--the workhorses of every cell--has long eluded evolutionary biologists, largely because ancient proteins have not been available for direct study. But in a study that was partially funded by the National Science Foundation (NSF), Thornton and Jamie Bridgham, a postdoctoral scientist, used state-of-the-art computational and molecular techniques to recreate the progenitors of an important protein known as the glucocorticoid receptor (GR).

Next, Thornton collaborated with University of North Carolina biochemists Eric Ortlund and Matthew Redinbo, who used ultra-high energy X-rays from a stadium-sized Advanced Photon Source at Argonne National Laboratory near Chicago to chart the precise position of each of the 2,000 atoms in the ancient proteins. The researchers then worked together to trace how changes in the protein's atomic architecture over the last 450 million years enabled GH to evolve its current unique function: to enable cells to respond to the hormone cortisol, which regulates the body's stress response.

"This is the ultimate level of detail," Thornton said. "We were able to see exactly how evolution tinkered with the ancient structure to produce a new function that is crucial to our own bodies today. Nobody's ever done that before."

The techniques used in this study were incredibly creative and integrative," says Dianna Padilla, an NSF program director. "These researchers have achieved something that other scientists only dream of."

Through their analyses of atomic structures, the scientists determined that just seven historical mutations were needed over the last 450 million years for GR's progenitors to evolve GR's present-day response to cortisol. The scientists also discovered that for the protein to acquire its response to cortisol, certain major mutations had to have been preceded by certain other relatively small, otherwise negligible changes, known as "permissive" changes. Such relationships helped the scientists deduce the order in which all of the gene mutations occurred.

Specifically, Thornton's studies showed that the evolving protein's most radical mutation remodeled a whole section of the protein, bringing a group of atoms close to the hormone. A second mutation in this repositioned region then created a tight new interaction with cortisol. Other earlier permissive mutations buttressed particular parts of the protein so they could tolerate this eventual remodeling.

"These permissive mutations are chance events," Thornton said. If they hadn't happened first, then the path to the new function could have become an evolutionary road not taken. Imagine if evolution could be rewound and set in motion again: a very different set of genes, functions and processes might be the outcome."

Other organizations besides NSF that helped fund this project included the National Institutes of Health, the UNC Lineberger Comprehensive Cancer Center and an Alfred P. Sloan Research Fellowship to Thornton.