Light Brings Out the Worst in Some Disease-Causing Bacteria

Bacteria can sense light, and light exposure increases the virulence of one type of disease-causing bacteria 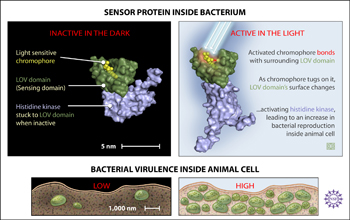 Proteins in bacteria located inside an animal cell sense light and cause virulence to increase.

A new study shows that some types of bacteria can sense light, and that exposing one type of disease-causing bacterium--the Brucella bacterium--to light increases its capacity to infect humans and livestock. This study represents the first time that light has been shown to play a role in bacterial virulence (infection).

Brucella bacteria "have been very well studied for years, and no one knew they could sense light," said Trevor Swartz of the University of California, Santa Cruz, the study's lead author. "And now it seems like it's a common thing rather than being an anomaly."

The study, which was partially funded by the National Science Foundation (NSF) and conducted by an international team of scientists, is described in the August 24 issue of Science.

The scientists found that bacterial sensors are closely related to phototropins-- the light receptors that detect blue light and direct plants to grow towards light sources. "The central message is that many bacteria have signaling proteins that contain the same light-absorbing domain as those found in the higher plants," says Winslow Briggs of the Carnegie Institution, who was a member of the research team. "One of these is a vicious pathogen called Brucella. A species of Brucella is a serious pathogen of cattle that causes abortions of calves, and another species is a nasty pathogen of humans."

The researchers are unsure of how the regulation of virulence by light benefits Brucella. But they suspect that it somehow helps the bacteria overcome the human or animal host's disease-fighting defenses and enables it to reproduce rapidly. They also suspect that light signals the bacteria when it is outside of a host, such as an infected, aborted cow fetus lying in a field. Under such circumstances, increased virulence would help the bacteria survive and infect a new host.

Like plant phototropins, the bacterial sensors have a protein sequence called a LOV (pronounced "love") protein domain, so named because it detects light and resembles some molecular packages that detect oxygen or voltage.

The study in the August 24 issue of Science confirms the light-sensing function of the LOV domain proteins in four bacteria species. But the ubiquity of the light structures in bacteria species suggests that light may play a much more important role in bacterial life and virulence than previously believed.

"The U.S. researchers in this study have been pioneers in the study of light sensing in plants," says Parag Chitnis, an NSF program director. "Their NSF-supported research on plants led to a thread of discoveries that have now revealed the role of light in bacterial virulence in animals. Their work provides an excellent example of how basic research in one area can lead to new insights in a completely unrelated area."