"Miniaturization" is hallmark of bird origins 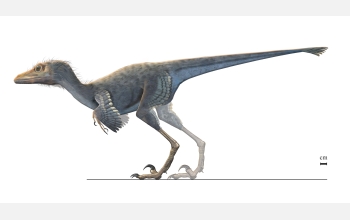 This reconstructed dinosaur from the Gobi Desert shows early characteristics of bird flight.

An 80-million-year-old dinosaur fossil unearthed in the Gobi Desert of Mongolia demonstrates that miniaturization, long thought to be a hallmark of bird origins and a necessary precursor of flight, occurred progressively in primitive dinosaurs.

The find, described in the September 7 issue of the journal Science, is made up of the fossilized bones of a new dinosaur the researchers have named Mahakala, and includes portions of its skull, forelimb and hindlimb, as well as much of the vertebral column.

Mahakala is an early evolutionary offshoot of the group of carnivorous dinosaurs known as dromaeosaurids that also includes the agile, sickle-clawed Velociraptor made famous in the 1993 movie Jurassic Park.

"This study alters our understanding of the evolution of birds by suggesting that flight is a 'spin-off' adaptation of a much earlier trend toward miniaturization in certain dinosaur lineages," said H. Richard Lane, director of the National Science Foundation (NSF)'s Sedimentary Geology and Paleobiology Program, which funded the research along with NSF's Assembling the Tree of Life Program.

"Paleontologists thought that miniaturization occurred in the earliest birds, which then facilitated the origin of flight," said Alan Turner of the American Museum of Natural History and Columbia University in N.Y., and lead author of the Science paper. "Now the evidence shows that this decrease in body size occurred well before the origin of birds and that the dinosaur ancestors of birds were, in a sense, pre-adapted for flight."

Because most dinosaurs were too massive to fly, miniaturization has been considered crucial to the origin of flight. Although paleontologists have shown that birds evolved from bipedal carnivorous dinosaurs known as theropods, fossil evidence of miniaturization and other characteristics leading to flight has been sparse.

Mahakala is providing the first signs of these early evolutionary steps. While other dinosaurs of the Cretaceous Period were evolving in favor of increased body size, Mahakala represented a progressive step towards miniaturization of body forms necessary for feathered dinosaurs to take flight.

"Flight isn't an easy thing, because you are, in effect, countering the force of gravity," said Turner. "Being really small appears to be a necessary first step. Other groups that evolved flight, such as pterosaurs and bats, all evolved from small ancestors. With the discovery of Mahakala we were able to show that this miniaturization occurred much earlier."

After a microscopic examination of the fossilized bones, the researchers concluded that the animal was a nearly full-grown young adult when it died, measuring less than two feet in length and weighing about 24 ounces. When integrated into the broader context of the dinosaur family tree, Mahakala shows that dinosaurs' size decreased progressively as they evolved toward birds.

"Many of the animals that were thought to look like giant lizards only a few years ago are now known to have been feathered, to have brooded their nests, to have been active, and to have had many other defining bird characteristics, like wishbones and three forward-facing toes," said Mark Norell of the American Museum of Natural History, also an author of the Science paper.

"We can now add that the precursors of birds were also small, primitive members of a lineage that later grew much larger--long after their divergence from the evolutionary stem leading to birds."

In addition to Turner and Norell, other members of the team included Diego Pol from the Museo Paleontologico Egidio Feruglio in Argentina; Julia Clarke, from North Carolina State University; and Gregory Erickson from Florida State University.

The study also was supported by the American Museum of Natural History and Columbia University.