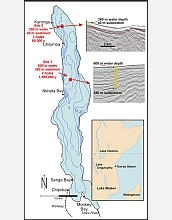 A drastic change in the climate of tropical Africa may have significantly driven early human evolution, an international team of scientists has found.

The results are published online this week in the journal Proceedings of the National Academy of Sciences. Among the findings is that a transition from a time period with extreme droughts (135,000 to 75,000 years ago) to a stable, wetter climate may have stimulated the expansion and migration of early human populations.

The findings are part of a project called the Lake Malawi Drilling Project, funded by the National Science Foundation (NSF). Lake Malawi is located at the southern end of East Africa's Rift Valley, and is the third largest lake in the Southern Hemisphere.

"The sediment cores from Lake Malawi are the longest continuous record of climate change available from the continental tropics," says Paul Filmer, program director in the National Science Foundation (NSF)'s Division of Earth Sciences, which funded the research. "The link between the signals of East African moisture levels in core samples from the lake and a critical stage in human evolution is an important discovery."

The researchers studied lake cores from Lake Malawi and found that megadroughts characterized some of tropical Africa's driest periods over the last million years or more.

During the most severe episodes, the lake was below 15 percent of its current level--only 100 meters deep rather than 700 meters. Before about 70,000 years ago, the climate was highly variable, African lakes dried up completely and then refilled, and plant and animal populations grew and died out.

Then around 70,000 years ago, the climate became wetter and stabilized, and African lake levels rose dramatically, the researchers found. Human populations grew rapidly and migrated at that time.

"The population expansion and subsequent spreading of 'Out of Africa' human colonizers may have been aided by the newly stabilized climate," says scientist Christopher Scholz of New York's Syracuse University and lead investigator on the project.

The findings from the Lake Malawi Drilling Project and other similar lake drilling projects in the tropics "are likely to make major changes in our understanding of the Earth's climate history and its effects on our planet's ecosystems," says Andrew Cohen, a research team member at the University of Arizona. "This study shows what a rich record of climate change is in deep and ancient lakes like Malawi."