Nanomaterials With a Bright Future 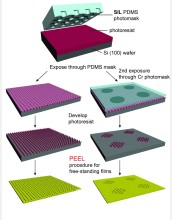 An innovative and inexpensive way of making nanomaterials on a large scale has resulted in novel forms of advanced materials that pave the way for exceptional and unexpected optical properties. The new fabrication technique, known as soft lithography, or SIL, offers many significant advantages over existing techniques, including the ability to scale-up the manufacturing process to produce devices in large quantities.

The research, funded by the National Science Foundation (NSF) and led by Teri Odom of Northwestern University, appears as the cover story in the September 2007 issue of Nature Nanotechnology.

The optical nanomaterials in this research are called 'plasmonic metamaterials' because their unique physical properties originate from shape and structure rather than material composition only. Two examples of metamaterials in the natural world are peacock feathers and butterfly wings. Their brightly colored patterns are due to structural variations at the hundreds of nanometers level, which cause them to absorb or reflect light.

Through the development of a new nanomanufacturing technique, Odom and her co-workers have succeeded in making gold films with virtually infinite arrays of perforations as small as 100 nanometers--500-1000 times smaller than a human hair. On a magnified scale, these perforated gold films look like Swiss cheese except the perforations are well-ordered and can spread over macroscale distances. The researchers' ability to make these optical metamaterials inexpensively and on large wafers or sheets is what sets this work apart from other techniques.

"One of the biggest problems with nanomaterials has always been their 'scalability,'" Odom said. "It's been very difficult or prohibitively expensive to pattern them over areas larger than about one square millimeter. This research is exciting not only because it demonstrates a new type of patterning technique that is cheap, but also one that can produce very high quality optical materials with interesting properties."

For example, if the perforations or holes are patterned into microscale "patches," they show dramatically different transmission behavior of light compared to an infinite array of holes. The patches appear to focus light while the infinite arrays do not.

Moreover, their optical transmission can be altered simply by changing the geometry of perforations rather than having to "cook" a new composition of materials. This feature makes them very attractive in terms of tuning their behavior to a given need with ease. These materials can also be superior as optical sensors, and they open the possibility of ultra-small sources of light. Furthermore, given their precise organization, they can serve as templates for making their own clones or for making other ordered structures at the nanoscale, such as arrays of nanoparticles.

"The work of Professor Odom is an outcome of a grant mechanism at NSF called Small Grants for Exploratory Research that is aimed at exploring high-risk, high-payoff ideas that are potentially transformative to the field said Harsh Deep Chopra, director of NSF's Metals Program in the Division of Materials Research. "The early results are encouraging and suggest the potential for a new generation of optical devices." This work is supported both the Metals Program and the Materials Research Science and Engineering Centers Program in the Division of Materials Research at NSF.