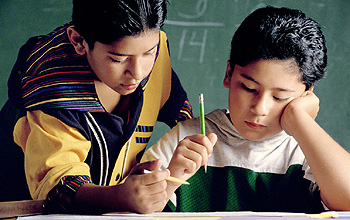 Hispanic students can tune in to science stories on radio and Web through "Cielo y Tierra."

While Hispanic-Americans make up a large and growing percentage of the U.S. population, they fall behind other minorities in choosing science as a career. To attract more Hispanics to the sciences, the producers of one of the longest-running science radio shows, "Earth & Sky," are launching a Spanish-language version on September 24.

A major grant from the National Science Foundation (NSF) is making it possible to produce 600 one-minute science radio spots in Spanish over the next three years. The spots will feature the latest science news as well as answering listeners' science questions in Spanish.

"The project is highly innovative in working to build an online community of Hispanics interested in science," says NSF program manager Sandra Welch.  "The use of broadcast radio, podcasts, eblasts and blogs will be tested and refined.  It will provide a new model for using the media to reach the growing population of Hispanics in this country and get them interested and engaged in science."

Cielo y Tierra complements the original Earth & Sky, which has broadcast more than 5,000 two-minute, 90-second and 60-second radio shows since its launch in 1991.  It has produced numerous eight- to 14-minute podcasts featuring scientists explaining their work, and a Web site at http://www.earthsky.org offering blogs, a daily sky watch report and other resources.

While an estimated 44.3 million Hispanics live in the United States, making up 15 percent of the population, only 3.2 percent of the science workforce is Hispanic.

Hispanic scientists and civic leaders are supportive of this effort to reach out to people of all ages in Spanish. Nobel Prize laureate Mario J. Molina (1995, chemistry) noted that "Cielo y Tierra" "will undoubtedly become a very valuable educational resource for promoting science knowledge within our Hispanic community."