Oxygen on Earth: 50 to 100 Million Years Earlier Than Scientists Thought 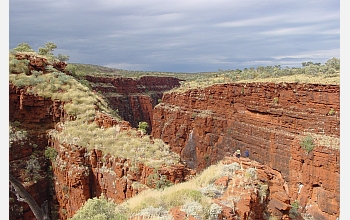 Oxygen has been found before this formation of iron oxide, or rust, in Western Australia.

Scientists have found that traces of oxygen appeared in Earth's atmosphere 50 to 100 million years earlier than previously thought--before what geologists call the "Great Oxidation Event."

This event happened between 2.3 and 2.4 billion years ago, when most geoscientists think atmospheric oxygen rose sharply from very low levels. The amount of oxygen before that time has been uncertain.

Analyzing layers of sedimentary rock in a kilometer-long core sample from the Hamersley Basin in Western Australia, the researchers report finding evidence that a small but significant amount of oxygen--a whiff--was present in the oceans and possibly Earth's atmosphere 2.5 billion years ago.

The data also suggest that oxygen was nearly undetectable just before that time. Their findings appear in a pair of papers in the Sept. 28 issue of the scientific journal Science. The National Science Foundation (NSF) funded the research.

"We seem to have captured a piece of time before the Great Oxidation Event during which the amount of oxygen was actually changing--caught in the act, as it were," said Ariel Anbar, a biogeochemist at Arizona State University in Tempe.

Anbar led one of the teams of investigators and participated in another team led by Alan Jay Kaufman, a geochemist at the University of Maryland in College Park. The collaborators analyzed a drill core for geochemical and biological tracers representing the time just before the rise of atmospheric oxygen.

"We have compelling evidence for a shift in the oxidation state of the surface ocean 50 million years before the Great Oxidation Event," said Kaufman. "These findings are a significant step in our understanding of the oxygenation of Earth. They link changes in the environment with changes in the biosphere."

"These results are the culmination of a successful effort to recover suitable rock material, and to test hypotheses regarding the evolution of biogeochemical cycles on Earth in the time period after the appearance of life and prior to the Great Oxidation Event," said Enriqueta Barrera, program director in NSF's Division of Earth Sciences, which funded the research.

The work also received support from the Astrobiology Drilling Program (ADP) of the NASA Astrobiology Institute (NAI) and the Geological Survey of Western Australia.

In the summer of 2004, the scientists bored into the geologically-famous Hamersley Basin in Western Australia, extracting a core of sedimentary rock 908 meters (about 3,000 feet) long.

"The core provides a continuous record of environmental conditions, analogous to a tape recording," explains Anbar. Because it was recovered from deep underground, it contains materials untouched by the atmosphere for billions of years.

Anbar and his research group began an analysis of selected bands of the late Archean Mt. McRae Shale found in the upper 200 meters of the drill core. They analyzed amounts of the trace metals molybdenum, rhenium and uranium. The amounts of these metals in oceans and sediments depends on the amount of oxygen in the environment.

The goal was to characterize the nature of the environment and life in the oceans leading up to the Great Oxidation Event.

"The Maryland group began seeing funny variations in the chemistry of sulfur along this stretch of the drill core," said Anbar. "We sped up our research to see if we found variations in metal abundances in the same places - and we did."

Finding evidence of oxygen some 50 to 100 million years earlier than what was previously known was completely unexpected, say the scientists.

For the first half of Earth's 4.56-billion-year history, the environment held almost no oxygen, other than that bound to hydrogen in water or to silicon and other elements in rocks. "Then, some time between 2.3 and 2.4 billion years ago, oxygen rose sharply in the Earth's atmosphere and oceans, during the 'Great Oxidation Event,'" said Anbar.

The event was a major step in Earth's history, said Anbar, but its cause remains unexplained. How did Earth's atmosphere go from being oxygen-poor to oxygen-rich, why did it change so quickly, and why did its oxygen content stabilize at the present 21 percent?

"Studying the dynamics that gave rise to the presence of oxygen in Earth's atmosphere deepens our appreciation of the complex interaction between biology and geochemistry," said Carl Pilcher, director of the NAI. "The results support the idea that our planet and the life on it evolved together."

One possibility for explaining the Great Oxidation Event is that the ancient ancestors of today's plants first began to produce oxygen by photosynthesis at this time.

"What we have now are new lines of evidence for oxygen in the environment 50 to 100 million years before its big rise," Anbar said. This discovery strengthens the notion that organisms produced oxygen long before the Great Oxidation Event, creating features in the geologic record such as banded iron formations, and that the rise of oxygen in the atmosphere was ultimately controlled by geological processes.

"This knowledge is relevant to today's studies of environmental and climate issues because it helps us understand the interactions between biology, geology and the composition of the atmosphere," Anbar said.

"It also has implications for the search for life on planets outside our solar system. In the near future the only way we can look for evidence of life in such far-off places is to look for the fingerprints of biology in the compositions of their atmospheres. We are not far off from being able to detect Earth-like planets elsewhere in the galaxy, and eventually, we will be able to use telescopes to measure the oxygen content of their atmospheres."

Questions Anbar hopes to investigate include: if scientists find that no Earth-like planets have undergone Great Oxidation Events, what will that mean about life on Earth? Is it inevitable that the evolution of oxygen-producing organisms results in an oxygen-rich atmosphere?

And, he said: "Can we find evidence that oxygen was produced even earlier?"